BoCoCelli, a cello ensemble of graduate students from Boston Conservatory at Berklee College of Music coached by Rhonda Rider, Head of Strings at the Conservatory, will play classical and contemporary works at Woods Hole Community Hall on Friday, March 16, at 7 PM.

The cellists are Ben Baker, Jeremiah Everard Barcus, William Laney, Margaret Madsen, Brianna Tagliaferro, Nathaniel Taylor, and Alexander Ullman. Joining them for a 27-cello performance of “Amazing Grace” will be Nikki Patton and 18 local cellists who study with her at her Chappaquoit Cello Studio in West Falmouth.

Featured on the program is Antonio Vivaldi’s Concerto for Two Cellos in G Minor. Written in 1720, it remains one of his most popular works. Nathaniel Taylor and Jeremiah Everard Barcus are the soloists in this arrangement for cello ensemble.

Kaija Saariaho’s 1998 composition, “Neiges,” was written for eight cellos. The piece was inspired by snowflakes falling from the dark sky in the Finnish autumn and offers five variations on dark and light textures, symmetry, and repetition.

“Air on the G String” is August Wilhelmj’s arrangement of the second movement of Johann Sebastian Bach’s Orchestral Suite No. 3 in D Major. The warm, expressive, and lyrical air is one of Bach’s most-loved melodies.

The cellists will play two works by Henry Purcell: “Nymphs and Shepherds” (1695), a song from “The Libertine,” a play by Thomas Shadwell, and “When I Am Laid in Earth” (1689), an aria from Purcell’s opera “Dido and Aeneas.”

Works by two contemporary Latin American composers round out the program. “Oblivion” is a hauntingly beautiful tango about love and sadness written Argentinian composer Astor Piazzola in 1982. “Toro-Lobiana” by Brazilian composer Dimitri Cervo was inspired by Brazilian indigenous music and the music of Heitor Villa-Lobos.

Rhonda Rider was a founding member of the Naumburg Award-winning Lydian Quartet and Triple Helix Piano Trio. Her chamber music and solo recordings have been nominated for Grammy awards and cited as Critic’s Choice in both the New York Times and the Boston Globe. She has won numerous awards as a chamber musician and a soloist. 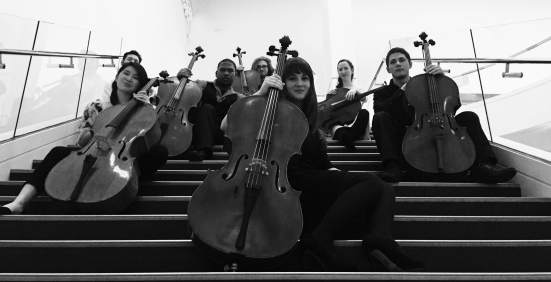 Ben Baker graduated from The Eastern School of Music with a BM in Performance and a Performer’s Certificate. A native of Boston, he tours throughout New England performing folk and contemporary music.

Jeremiah Everard Barcus, from Philadelphia, is the cellist in the Videri Quartet, which specializes in string quartet video game music. A graduate of New England Conservatory, he recently toured Japan with pianist Rui Urayama.

William Laney, from South Carolina, and has attended Aspen and Green Mountain Festivals. He studied at the University of South Carolina in Columbia.

Margaret Madsen is from St. Louis, Missouri. She was a member of the Chicago Composers’ Orchestra and attended DePaul University before moving to Boston.

Brianna Tagliaferro, from Plainsboro, NJ, is a graduate of Rutgers University and performs with Split the Lark New Music Ensemble.

Nathaniel Taylor, from Washington DC, won first prize in the American String Teacher’s Association Massachusetts Competition and is a fellow at the Tanglewood Music Center.

Alexander Ulllman is from Fairfield, Connecticut. He attended the University of North Carolina at Chapel Hill where he studied cello and was a research assistant in chemistry.