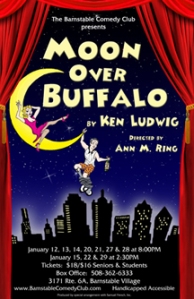 The Barnstable Comedy Club has a winner with “Moon Over Buffalo,” a witty slapstick comedy with heart and with an excellent ensemble cast. Written by Ken Ludwig and directed by Ann M. Ring with assistance from Katie Lynch Koglin, the show runs through January 29, with shows Friday and Saturday at 8 PM and Sunday at 2:30 PM.

It is 1953 at the Erlanger Theatre in Buffalo, New York (“like Scranton, but without the charm“), and George and Charlotte  Hay are performing “Cyrano de Bergerac” and “Private Lives” in repertory, often disagreeing over which play they are rehearsing—or performing. Obviously in love with each other and with the theater, the two lose and find and miscommunicate with each other throughout. Kevin Morrow plays George with humor and a joie de vivre, whether he is swordfighting with Charlotte, denying a flirtation with a young actress, or getting hopelessly, but engagingly, drunk.

Christy Morris is Charlotte, who years for a role in the movies, pinning her hopes on getting a role in Frank Capra’s new film, “Twilight of the Scarlett Pimpernel.” But her passion for the theater shows through, and so does Ms. Morris’s, as she plays not only a manic but endearing Charlotte, but also a fine assortment of Charlotte’s characters. And, on opening night, when George threw down his bottle of whiskey a little too aggressively, and it rolled off the stage and into the audience, she remained in character when she asked a member of the audience to return it.

As the play opens, George and Charlotte’s daughter Rosalind has come for a visit to introduce her fiancé Howard to her parents. Upon arriving Rosalind, played by Angela Courtney Rossi, has a delightful conversation with Charlotte’s mother Ethel, played by Karen McPherson, who is hard of hearing, but serves as the solid foundation that keeps the family and the theater together.

Ms. McPherson is perfect in this role, bringing out the wit and wisdom in every line. “The theater,” Ethel says, “is our lifeline to humanity—without it, we would all be Republicans.”

Ms. Rossi’s Rosalind might be perceived as the only sane one in the group—she has left the crazy life of  theater for a more sensible career and has found a nice, sensible man to marry. Ms. Rossi is a delight to watch, as she tries to deal with her parents, her former boyfriend Paul (nicely acted by Mike Devine), an actor with the company, and when she takes the stage in a matinee performance, filling in for a missing actress. She does a fine job in the play-within-a-play, stalling for time when her father is too drunk to find his way to the stage.

Howard, an earnest weatherman who is awestruck in the presence of Rosalind’s semi-famous parents, is played by Paul Beatty. Mr. Beatty brings a wide-eyed innocence to the role, as his character repeatedly misunderstands what is going on and is misunderstood in return.

Rounding out this fine cast is Kate Connelly as Eileen, the actress George dallies with, and Todd Moos as Richard, who attempts to take Charlotte away from it all.

“Moon Over Buffalo” is fun and engaging. It not only entertains, but affirms the value of theater, particularly community theater, in our lives.

The set, representing the green room at the Erlanger Theatre was designed by Dennis Marchant, and works well for this show. Ms. Morris does double duty as costume designer.

One thought on ““Moon Over Buffalo” Sparkles with Wit and Warmth”