I was particularly curious about Jane Perkins’ one-woman production, “Happy Endings: A Dark Comedy About Seeing the Light,” now at the Cotuit Center for the Arts’ Black Box Theater, not only because it is about that most intriguing and mysterious subject, death, but because Perkins is a hospice nurse.

My mother died five years ago in a hospice in Cincinnati, and my sister and I were with her for the five days she spent there. We went from frantic and stressful efforts to save her life in a busy hospital to the incredible peace and support of a small hospice. It felt like an oasis.

There was a small chapel with a waterfall; there were CDs with gentle flute, cello, and harp music that one could play softly, through speakers built into the beds. A bouquet of pink flowers brightened the bedside. Volunteers sewed and distributed small pillows of various sizes and shapes to ease small pains.

Every day different volunteers came to offer comfort and conversation. And the nurses were just wonderful, supportive, but realistic, responsive to both patient and family. It was like being in a warm and protective bubble, away from the cares of the world, except, of course, for the reason why we were there. There were conflicts and coming together.

So, I wanted to hear about the experience from the point of view of one of those angelic hospice nurses. 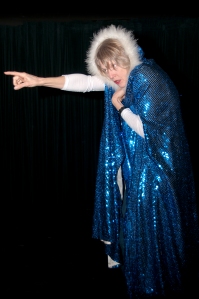 Perkins enters as a the Grim Reaper, but not the typical faceless black-cloaked Grim Reaper. She is dressed in a sequined electric blue cape with fluffy white fur encircling the hood, dancing a goofy little dance before doffing the garment and introducing herself as Death.

She is a friendly and good-humored Death, welcoming to all of us who will ultimately be hers.

“Let’s get to know each other” she invites. “Slowly–we will have all of eternity together.”

Throughout the one-long show, she receives cell phone calls from an unspecified dispatcher who coordinates her activities and those of her colleagues, Expired, Passed Away, and other euphemisms for death. There is always a lot to do.

Sometimes, Death shared with us, when a loved one seems determined to hang on to life, it is not that their will to live is so strong–it is simply that it was so busy that “we couldn’t get to them.”

Perkins alternates her role as Death, providing various reality-based and imaginary insights into death and the afterlife, with a continuing story about Beth Fife (whose name rhymes with Death Life), a 90-year-old woman approaching death, and her four grown children. Perkins acts out all the roles convincingly by donning different hats and assuming different mannerisms for each adult child and wearing a shawl for the dying matriarch.

Chances are you will recognize yourself–or a sibling, parent, or friend–in one of the characters. As the mother, Perkins wistfully imagines a last trip to Disneyworld, where everyone is smiling, where you can enjoy the children without having to take care of them, in and where you don’t have to go on the rides.

The older son, 60, takes care of his mother, and longs for freedom from the task of figuring out which size of Depends to buy, longs for a life of 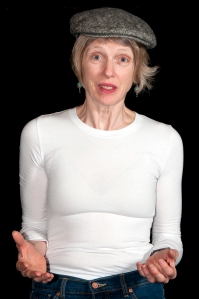 his own, at last. The other son is a straight-laced humorless lawyer, willing to donate his services to the family without a fee.

The joint-smoking daughter strolls in singing “How do you solve a problem like my Mommy?,” while another daughter wonders if she truly loves her mother and  what it all means.

Death occasionally offers the perspective of hospice nurses. One comment which hit home for me was about the relative who keeps asking “how long does she have?” We hear the dying patient’s disgust–“I am in a coma, but I can still hear.” Death tells us that the dying person, upon arriving in heaven, soon forgets this annoyance, as she runs off to enjoy the fireworks. And the hospice nurse explains to us that the relative’s questions are a reflection of his loss of control in the situation.

Dying is a process, Death tells us, and family ties can be a straight-jacket or they can be like Tibetan prayer flags blowing gracefu 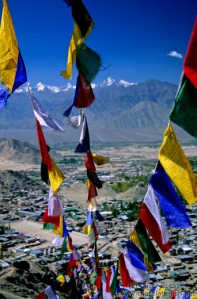 lly in the wind, rising and falling like respiration, bringing laughter, understanding, and inspiration.

Perkins is a fine actor and keeps our interest throughout the show. The program reveals that, in addition to being a hospice nurse here on the Cape, she once lived in New York City where she performed in plays, television, and movies. This is her first performance on the Cape; I trust there will be many more.

The set is spare, the props minimal, but the reflections on life and death and family relationships are thoughtful and often very funny.

2 thoughts on ““Happy Endings,” a Comedy about Death”