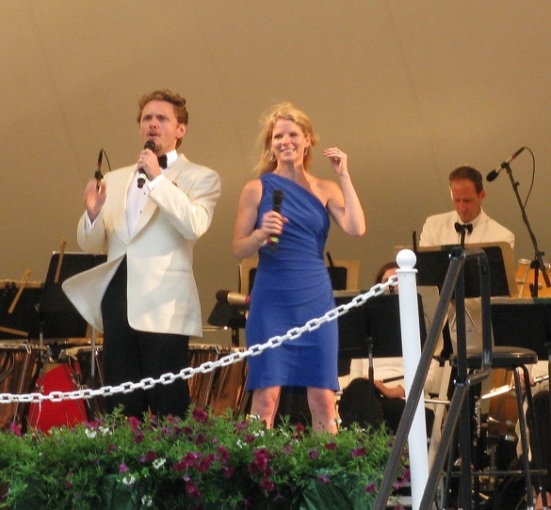 Even at 1:30 PM or so, when we arrived in Hyannis on Sunday for the 26th Annual TD Bank Pops by the Sea concert, it was hard to find a place to park. We got the last quasi-legal space in one of the parking lots behind Main Street, and headed over to the Hyannis Village Green, where the Boston Pops  Esplanade Orchestra was scheduled to perform from 5 to 7 PM.

It was a gray, cold, windy, and rainy day, but the Boston Pops concert is a wonderful tradition, and has some very loyal fans. Most of them probably decided to wait for the concert in the shelter of a Main Street restaurant or shop, as the Village Green was almost empty when we arrived.

We had jackets, hats, and umbrellas, and, when we checked in, were given bright white plastic rain ponchos with cheery TD Bank logos in green. We headed for the press tent, where two people from Hyannis Patch, the online newspaper, had already set up a video camera for a time-lapsed photographic record of the Green filling up with people.

Except that the green did not fill up quickly. There were a sprinkling of people near the side stage where valiant bands were performing the pre-show concert, only minimally sheltered from the rain. We arrived too late to hear the Bart Weisman Klezmer Swing Group, who began performing at 1 PM. I had seen them play at the Falmouth Arts Alive Festival and was sorry to have missed them. Led by percussionist Bart Weisman, the group includes Clayton March on clarinet and saxophone, Monica Rizzio on vocals and violin, Alan Clinger on guitar, and Laird Boles on string bass.

We did catch a bit of Funktapuss (please forgive the shakey footage, as I was trying to balance the camera and my umbrella):

But it was raining heavily, and the wind was turning umbrellas inside out. A few brave souls camped out to watch and listen, and to show their appreciation with whoops and hollers.

By then a crowd had gathered in the press tent. Not press people, but people who preferred standing under the capricious shelter of an open tent to sitting in their $50 seats out in the wind and rain. Some of them shared their cheese and crackers with us. One of them happened to be a radio weatherman who told us that the front was moving east, that the end of the deluge was in Mashpee, and the skies would clear just in time for the Boston Pops.

Another weather guy came by and said there was another storm front behind the first. The man next to me said he chose to believe the first guy.

Despite the weather, there was a festive air. “I wonder if people will want their money back,” I ventured, looking at the sea of green where the lawn ticket holders usually sit, and the rows of empty $50 and higher-priced seats.

“No,” said one. “This is a fundraiser for the arts, and people understand that. They want to contribute.” The annual concert raises money for the Arts Foundation of Cape Cod, which uses the money throughout the year to support Cape Cod arts and culture.

I was also worried about the instruments, particularly the string instruments. The orchestra is under a canopy, but open to the elements, and wooden instruments do not take kindly to raindrops. When I asked him what precautions were being made to protect the instruments, the orchestra’s public relations person told me that Dennis Alves, artistic director, was “keeping all the string instruments (20 violins, 8 violas, 8 cellos, 6 string basses) on the truck.” Only one string bass would be played, by principal bass player, Robert Caplin, and some planned numbers would not be played.

Strings make up half the orchestra, and, of course, offer a different sound from the winds and brass instruments, so this was a huge change in the program, requiring, Mr. Alves said, a couple of songs to be dropped.

Eventually, most of the table seating filled up, and an announcement was made that the concert would start at 5:30 instead of 5, to give that weather front a chance to move through. Miraculously, at 5:30, the driving rain turned into a sporadic sprinkling, and the skies remained clear for a good part of the concert.

Then the concert got under way with a rousing “Strike Up the Band.”

The Boston Pops then skipped a medley of Irving Berlin tunes (including, ironically, “Blue Skies”) and Richard Rodgers’ “Carousel Waltz,” moving straight to one of the highlights of the concert, Kenneth Alford’s “Colonel Bogey March,” from the 1957 film, “Bridge on the River Kwai,” conducted by the movie-making Farrelly Brothers, Peter and Bobby. They seemed to have an excellent time, adding a lot of humor to an already upbeat march.

I put my video camera (it is a tiny FlipVideo) in my pocket after the performance, but forgot to turn it off. You can watch the video of my jacket pocket, while the brothers recite the “Guest Conductor’s Pledge.” 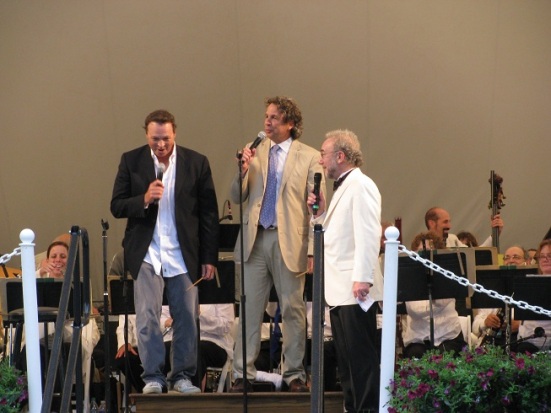 The Farrellys were followed by the Patriotic Sing-Along, which I chose to sing along with, rather than record. Sing-alongs are always fun, but this one was bonding and uplifting as well, as the soggy crowd got a chance to participate in the festivities.

Larry David was the special surprise guest. He said, “I would like to say it’s a pleasure to be here, but that would be a miserable lie.” He seemed to be referring both to the weather and to his reluctance to sing in public.

Intermission was omitted, and the Pops went right into the second half of the show, “A Tribute to Cole Porter, starring Kelli O’Hara and Jason Danieley.” Only about half of the scheduled 14 songs were performed, but they were wonderful. Both Broadway stars, Kelli and Jason have stellar voices, and lots of personality. They paired up for a couple of songs, including “Friendship.”

And each had a couple of solos. Here is Kelli’s “My Heart Belongs to Daddy.”

And Jason’s “Night and Day,” “like the drip, drip, drip of the raindrops, when the summer shower’s through.”

All too soon, it was over, as the Pops ended with “Stars & Stripes Forever.”

The whole concert had lasted about an hour. But it was a great hour, filled with good music and, for the most part, high spirits. Attendance was way down from previous years, but those who came–and they were all ages, from infants in their mothers’ arms to elderly people in wheelchairs–took it all in stride, and made the most of a great tradition. Many that we talked to come every year, not only to hear the Boston Pops, laugh at the antics of the guest conductors, and hear outstanding vocalists in person, but to be part of this great celebration of arts on the Cape.