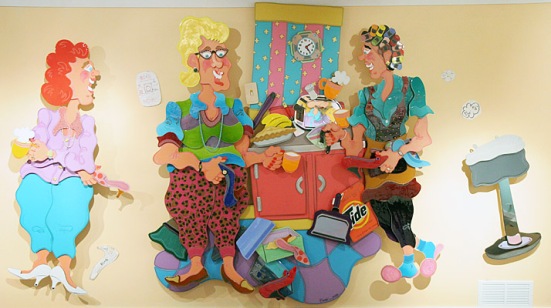 It is unlike any glass exhibition ever seen at the Sandwich Glass Museum. Ricky Bernstein’s “Kitchen Dreams” fills two rooms at the museum with his floor-to-ceiling Pop Art creations: warm and vibrant “visual stories” of the life he knew growing up in the 1950s, embellished a bit, in bold and colorful painted glass and aluminum.

“Dog Dreams” takes up one whole wall of the exhibit, stretching 21 feet from one dog to another. Made up of 75 pieces of glass and aluminum that fit together like a wonderfully complex jigsaw puzzle, the work depicts a life-size man and woman, Bob and Beverly, asleep in their gaily colored pajamas on their orange and purple couch.

“I Love Lucy” plays on the television, and their three oversized dogs, Butch, Spike, and Mongo, take advantage of the situation by raiding the fridge, their arms (they walk on two shoe-clad feet and wear eye-catching clothing) laden with sandwiches, cake, ice cream cones, and a bag of Fritos.

Beverly, like Ricky’s mother, Phyllis, loves to clip coupons, and she has fallen asleep with scissors and coupons in hand and curlers in her hair. Bob, dog treats in his lap and empty boxes of dog treats at his feet, dreams of the tricks he will teach Spike over the weekend.

It is a quite a concept, and a lot to take in all at once. Do take the time, savor the details, both of these marvelous works of art and the whimsical stories behind them. Look closely at this one and you can see that the pair of scissors that Beverly holds is not glass, but a real pair of scissors. And they are authentic to the period, as are Mr. Bernstein’s grandfather’s scissors.

Ricky Bernstein, during the installation of “Beverly, Lois, & Gladys” at the Sandwich Glass Museum. Photo by Gene M. Marchand.

On the opposite wall is “Beverly, Lois, & Gladys,” seven feet high, 14 feet long, and 14 inches deep. Three rumpled, somewhat lumpy housewives share a cup of coffee and ponder a big decision in the kitchen. But Mr. Bernstein describes the scene so much better:

While Gladys puttered around the kitchen, Beverly and Lois dropped by for a cup of coffee (‘cuppuh kawfee’) and some lively conversation. Gladys had slept late and was just finishing up her hair. How she loved her Dippity-do. She and Bob were going to the office party and naturally, she was agonizing over which shoes to wear. After several days, Gladys had narrowed the choice down to the red or blue pumps, but Lois thought she should definitely go with the pink polka dots. As usual…Beverly couldn’t make up her mind. ‘They all look so gaw-ghiss on you, Gladys,’ she gushed. That made Gladys all the more confused. Oh, what’s a girl to do? In the end she nervously decides on the pink pumps and worries about it all night.

In another piece, “Voila,” Gladys makes light work of dishwashing by dumping the dirty dishes in the garbage can, rather than in the sink.

Mr. Bernstein seeks to bring back a simpler, less sinister, time with his art, by recalling his childhood in the 1950s, his parents, particularly his mother, and her friends and relatives.

His caricatures of them, he said, are done with love and are in no way meant to be demeaning to women. “I am poking fun,” he said, “at the foibles of pop culture, at my own upbringing.”

His “balance” series, though comical, reflects his respect for the many roles and responsibilities that women juggle, maintaining a precarious balance. “The Big Night” shows a woman practicing for her husband’s office talent show. She is balancing bowling balls on top of coffee cups, suddenly realizing that a soft-boiled egg placed atop a bowling ball is what she needs for the trick to succeed.

Another aspect of his concern for women is the fact that Mr. Bernstein has directed, for the past 20 years, Hands in Outreach, an organization that provides literacy education for girls in Nepal, where girls have far less access to education than boys.

Mr. Bernstein’s pieces start out as stories, often autobiographical, but with plenty of imagination and exaggeration. His mother was a stay-at-home housewife, as were most mothers in the 1950s. She clipped coupons every night. She wore hair curlers. She watched “I Love Lucy.” She spent a lot of time in the kitchen, cleaning up, cooking, sharing coffee with friends. If you look closely, you will see her spatula in “Beverly, Lois, & Gladys.”

A cartoonist since he was 7 and growing up in Providence, Rhode Island, Mr. Bernstein always knew he would be an artist. He has worked full time as one since 1974 and has been “making a living” at art since 1979, when he opened his own studio. He began creating his glass figures and scenes about 20 years ago, after working in glassblowing, ceramics, and stained glass panels. He lives and works in the Berkshires.

Mr. Bernstein describes himself as a cross between Red Grooms, who is known for his detailed multi-media constructions of contemporary life, and Gary Larsen’s “Far Side” cartoons, which are known for their improbable situations.

Or, perhaps, he said, “Woody Allen in another genre.” There is clearly a similarity in his fond, but gently mocking, quirky depictions of an era gone by.

He wants people to respond to the story when they look at his art, to try to figure out what is going on in the picture, rather than wonder about how it was made. Still, it is interesting to look behind the scenes, to see the layers of glass and the bolts holding them together and to the wall.

Mr. Bernstein begins each piece with a story idea, from which he develops paper patterns, which are used not only to plan and cut the pieces, but also to map out their placement on a wall. He blows sheets of glass, cuts them to the shapes he needs, colors them with acrylics, oils, or colored pencil, maintaining his vision of matte and shiny surfaces.

Working with glass is a high-tech process he said; making the pieces is incredibly difficult. Asked why he chose to work in glass, rather than some easier material, such as plywood or canvas, Mr. Bernstein said, “Glass chose me. Glass and aluminum suit my needs. If it is not hard to do, it is not worth doing.”

It took him and his assistant, Bill Cary, three days to install the artwork in the glass museum, painstakingly following his paper patterns and hanging each piece on aluminum armatures. Sometimes the placement is not exact.

“There is a little morphing each time I hang it,” Mr. Bernstein said, “a little reworking “of angles and distances between pieces, sometimes depending on the venue. The limited wall space in the Sandwich Glass Museum, for instance, required that “Dog Dreams,” normally 25 feet across, be compressed to 21 feet.

The end result is well worth the effort, and well worth a trip to the Sandwich Glass museum to see. “Kitchen Dreams” will be there through October 30.