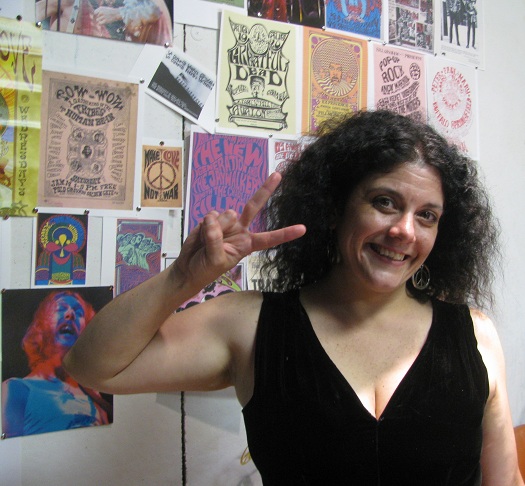 Christine Mascott welcomes everyone to the Happening.

The Woodstock era, the late 1960s and early ’70s returned to the Cotuit Center for the Arts on September 9. There were tie-dyed t-shirts, folksingers, folk rockers, poets on their soap boxes, and a roomful of hippie clothing and memorabilia. There was Phyllis Diller.

The Peace Corps and the military services were represented (though you could also burn a paper representation of your draft card—or your bra).

There were vendors selling clothing, jewelry, and other paraphernalia of the ’60s. There were posters and quotations written in chalk on the pavement. (Such as: “If you can remember the 60s, you weren’t there.”)

And, most importantly, there was a warm and mellow feeling everywhere, as the crowd enjoyed art, music, and camaraderie outside on a warm late-summer evening. “It’s Happening!” was created by Christine Mascott, lead singer of the Woodstock-era tribute band Groovy Afternoon.

As Christine explained it, a happening is a performance, event, or situation intended as art. Partly planned and partly improvisational, a happening is multimedia (though that term was not used back then) and enjoyed by a wide group of participants.

Here’s a short video to give you a flavor of the event. Annie Rich sings “Hang on Sloopy,” Manny and Linda Dias present “Black Magic Woman,” Denise Ramsey shares some of her poetry on the soapbox, Lola Packard performs as Phyllis Diller, members of the Falmouth Theater Guild dance and sing to promote their upcoming presentation of “Jesus Christ, Superstar,” and Hanna Carrita as Mimi Farina singing “Where Have All the Flowers Gone?”

The video ends with a glimpse of JoAnne Hughes’ art show, “The Circle is The Gate,” which had its opening reception the same evening. It was not technically part of the Happening, but JoAnne’s art fit the mood of the 60s. Beautiful to look at, it is also intended as a statement of her belief.

The big event was yet to come. After darkness fell, things really started happening. Groovy Afternoon put on a spectacular multimedia concert with an ever-changing video screen and impressive lighting effects. And there was a colorful cascade of balloons toward the end of the concert; the crowd jubilantly kept them bouncing until the last note was sung.

But it was more than a concert: it was a “Trip in’ Time.” Groovy Afternoon  transported us back to the ’60s via a backwards countdown on the video screen, and Christine guided us through the key moments and movements of the late 1960s and early 1970s—LSD, Woodstock, the antiwar movement, the civil rights movement, and more, introducing each song with a bit of history or anecdote.

Christine recreates the sounds of Janis Joplin, Grace Slick and many other singers of the day, and she does it with incredible energy and obvious love for the singers, the songs, and the era. She is joined by some very talented instrumentalists who capture the essence and the spirit of many different bands with ease, and bountiful enthusiasm.

Most of the crowd in the sold-out theater were probably too young to have lived through the sixties, but they clearly appreciated the music and eagerly joined in the dancing. As you can see, the crowd went wild!

Performing along with Christine are her husband Paul Mascott on guitar, Dan Lyons on keyboards and guitar, Steve Restaino on bass and mandolin, Kat Jones on percussion, and Andrew Ianniello.

The quote at the end, which may be difficult to read, is from John Lennon, and it says:

I was in college in Washington DC in the late 60s, a fine place to be to appreciate not only the music of the era, but the politics, and the activism of young people. Groovy Afternoon does a great job recreating the music of the time, but I particularly appreciated her call to action, to always keep those possibilities in sight.

As wonderful as the concert was, it was too loud for me, and the sheer volume distorted the sound, often drowning out the singer and making the words and the music “mushy,” as one person described it.

You can see from the video that we were in the minority; many people clearly enjoyed the music and the volume it was being played at. Loud music can be exhilarating. I continue, however, to make my plea for music to be performed at nondeafening volumes—so that it doesn’t damage tender eardrums (my handy iPhone sound meter registered in the danger zone)—and so that you can actually hear the music.

Groovy Afternoon is performing tomorrow (Saturday, September 24) at 3 PM at the Bourne Scallop Festival in Buzzards Bay. There is a big line-up stars for the three-day event, and, of course, scallops.

Annie Rich is performing at the Cape Cod Chat House in Dennis on Thursday, October 6, a 7 PM.

And the Falmouth Theatre Guild‘s production of  “Jesus Christ Superstar” opens October 28 at Highfield Theater in Falmouth, and runs through November 13.