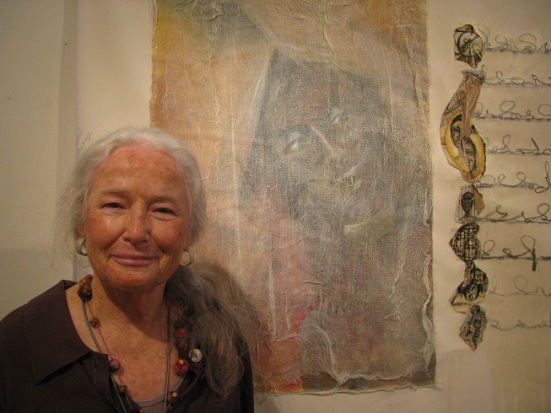 JoAnn Hughes with her self-portrait, with journal writing.

The paintings of JoAnn Hughes fill the main gallery space at the Cotuit Center for the Arts with warmth, texture, color, and beauty—and they pose thoughtful questions about the issues of women and the environment. 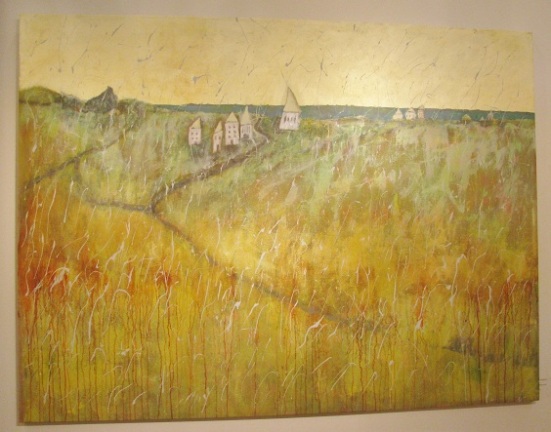 Many of the paintings are in subtle and rich earth tones, browns, beiges, whites, golden yellows, brick reds, and natural canvas, with some blues and greens. There is a charming coastal scene with fairy tale cottages in the distance, across a field of grasses, the blue ocean beyond. There are various representations of women, faces, figures. Fabrics and yarns are used, in addition to paint.

But most of the paintings in the exhibit have an abstract feeling to them with indecipherable writing and intriguing textures. Some are even interactive, encouraging the viewer to add her or his own contribution to the piece.

One can enjoy just looking at them, but they all convey a deeper meaning, and it is well worth taking the time to read the inscriptions and learn more about what Ms. Hughes intends to express through her art.

Ms. Hughes describes her artwork as journal paintings. Now 70, she began painting seriously when she was 50, as an outgrowth of her work in psychology and related fields.

“I almost needed to let go of all that,” she said at the opening reception last Saturday. Her formal education, her background, her work were all roles that defined her, but from outside herself, rather than from within.

Creating art is both freeing for her and a means of expressing, in images more than in words, her thoughts on contemporary social problems.

“Women’s lives are at the heart of what I do,” she said. “I focus on women’s experience.”

She is also inspired by poetry, myth, and her own life. Many of her paintings are part of a series of works on a particular topic of interest to her. 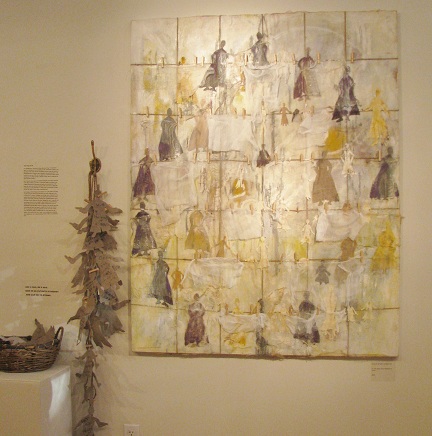 Hags, with a basket of cut-out fabric hags for viewers to write on and hang next to her mixed-media work.

One piece in the show that delighted older women at the opening reception was part of her Hag Series, which Ms. Hughes said was motivated by identity questions in aging women. In our culture, growing old and looking old are to be avoided at all costs, she said, and this “war on aging” has negative impacts on younger women as well as older ones. 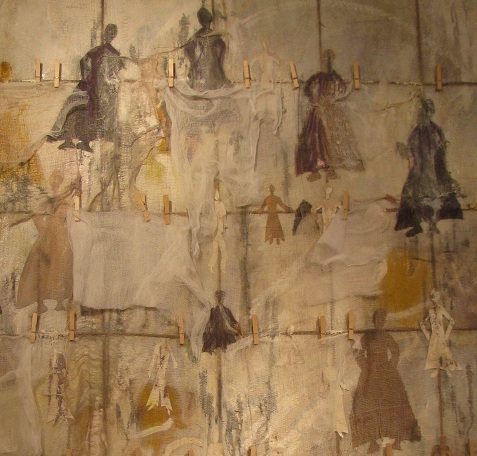 In contemporary American culture, she said, the term “hag” is used to derogatorily describe an old woman. During a trip to Ireland about five years ago, Ms. Hughes learned of the Hag of Beara, an old, but ageless woman who was revered as a powerful healer. As she learned more about this mythical woman, Ms. Hughes changed her own attitudes toward aging, moving from fear to appreciation and celebration.

Returning home, she talked about the Myth of the Hag with her friends, and they were eager to change their views on hags, too. As she states in a note prepared for the exhibit:

“We’re beginning to imagine gathering in circles, which were the ancient paths of wisdom and can be the gate into the future. The Circle is the Gate.”

Her mixed-media Hag painting features gauze and burlap hag shapes in muted shades of browns, tans, yellows, and whites against a geometrical background. It is a soft, misty, look at women and their relationships, soothing and appealing.

Women and men of all ages are invited to take a cut-out burlap hag from a basket adjacent to the painting, write something important to them on it, and attach it to a collection of hags by the side of the painting. It was an effective way of drawing the viewer to the artwork and aiding their understanding of the purpose of the Hag Series. 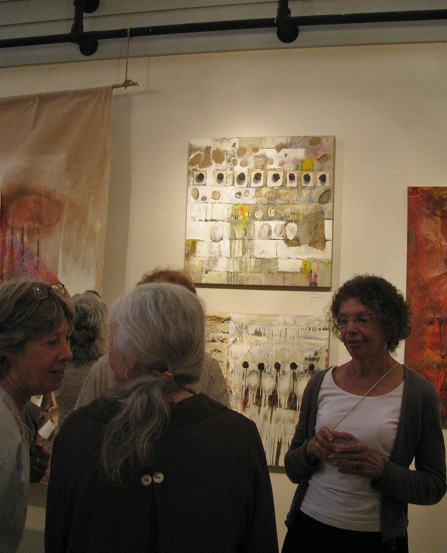 Two works from the Eggs series.

Another group, the Egg Series, emerged from Ms. Hughes’s concerns about the harvesting and sale of women’s eggs to be fertilized and implanted in women who are not otherwise able to become pregnant.

Women are paid for their eggs, which exploits vulnerable women in need, she said, and the process can be dangerous, resulting in health problems and even death. Not enough research has been done, Ms. Hughes said, to ensure the safety of the procedure for all concerned.

Two Egg paintings, of about six or eight, are included in the exhibit. Using a similar color palette of browns, yellows, golds, and whites, she shows the eggs, some breaking, looking a bit like chicken eggs, the yolk dripping down.

Another painting represents her Seeds Series. Called “Seeds of…,” it is a response to the situation in Darfur, the genocide, violence against women and children, hunger, and poverty. It asks “what are we sowing, peace or violence?” and “what are we reaping, hope or despair?” This work is also interactive, and visitors may write their own thoughts on a scrap of fabric and attach it directly to the painting, using a wire or tiny clothespin. 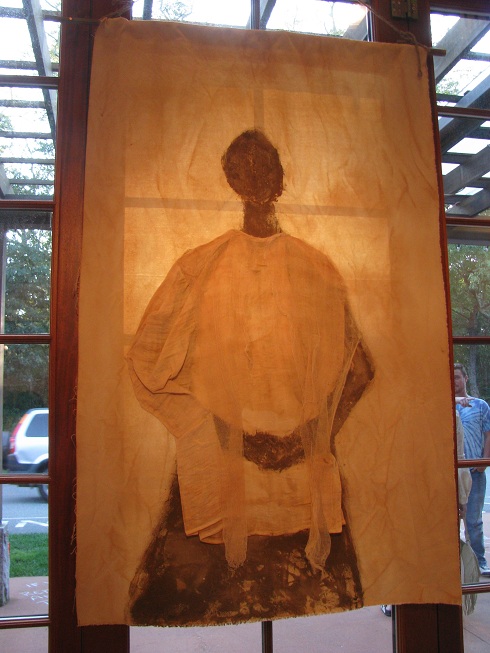 A figure of a women, hung in the window of the Cotuit Center for the Arts so that the setting sun can bring it to life.

Several other series address other social issues. Visitors may learn a lot about topics they may not have done much thinking about before. But even if they just stand back and look at these beautiful pieces, they will be moved.

Ms. Hughes lives in Yarmouthport and her work has been shown on Cape Cod, in Boston, New York City, the San Francisco Bay Area, and Ireland.