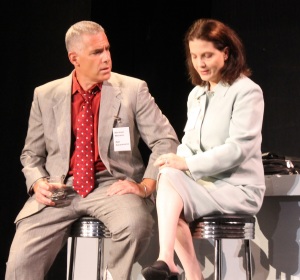 Rob Thorne as Michael and Theresa D. Cedrone as Kitty in “Happy Now?”

“Happy Now?” written by Lucinda Coxon and directed by Christy Morris, at the Barnstable Comedy Club through August 26, has many good things going for it. The plot is intriguing—it is about Kitty (played by Theresa D. Cedrone), a quietly frazzled woman with a professional career at a cancer research organization, a loving husband, two lively (unseen) children, a diabetic father facing the possible loss of a limb or worse, a passive-aggressive mother, and three alternately comforting and demanding friends.

“Is this my life, my one and only life?” Kitty asks.

The dialogue is well written and witty, often in surprising ways, and will probably hit home with anyone who has been a mother, wife, husband, or an adult child of an aging paren. The cast is accomplished, and there is some creative use of the stage, as the action dissolves from one scene into another. It is also kind of a talky play, in which characters frequently sit and talk in their varied British accents (the play takes place in London, in the present, which are sometimes hard to understand. The stage is sparely furnished, and one longs for a little more action, especially when two characters simply sit and talk to each other.

The first scene is very promising. Rob Thorne, as Michael, is terrific as the sleazy, but likeable, man whom Kitty meets at the hotel bar after giving her talk at a professional conference. The stress shows on her face, and they engage in small talk about the conference and their families. He understands the larger role that women play in taking care of house and home, even when both parents are professionals.

“I’m kind of like ice cream, or something,” Michael says, “good for a treat, but my wife does most of the work—she’s like the vegetables.”

As it turns out, Kitty has read Michael’s paper and was impressed by it. Excited that she has read it, he claps a hand down on her knee. She rejects his advances, but he explains in some detail how he goes about picking up women whose husbands don’t kiss them anymore, divulging all his “tricks to her.”

Thorne is hilarious, and Cedrone is great as the deer caught in Michael’s headlights. Michael predicts that Kitty will need him some day and say to herself, “I wonder if that sleazy, pathetic guy still wants to be nice to me?” Kitty’s dazed expression speaks volumes.

Cedrone has some very funny moments, as when she finds a way to feed her television-bound children, but often she just seems overwhelmed.

Theresa D. Cedrone as Kitty and Steven C. Koglin as her husband Johnny.

Steven Koglin is Johnny, Kitty’s husband, who has problems of his own, but seems, for the most part to be grounded (he gave up a law career to teach high school in order to have more time with his family). Koglin is laid-back and convincing as a good-natured, hard-working, easy-going husband, who, as Michael intuitively knows, no longer remembers to kiss his wife.

Kitty and Johnny are friends with Miles (Carl Back) and Bea (Diana Back), husband and wife both onstage and off, and Carl (Kevin Kenneally) is Kitty’s “gay friend.” Donna Lennon plays Kitty’s mother June.

Steve Koglin, Carl Back as Miles, Diana Back as Bea, Theresa Cedrone, and Kevin Kenneally as Carl

Miles, a former colleague from Johnny’s law firm, is an alcoholic who cruelly taunts his Bea and Carl. Carl Back is wonderfully nasty and adds a lot of vitality to the play, though he is foul-mouthed and would be unbearably rude in real life. Diana Back is just right his long-suffering wife who does, indeed, have her limits. There is a very funny scene in which, in separate areas on the stage, Bea tells Kitty, and Carl tells Johnny about their frustrations with the home improvement project they are undertaking.

Miles also has a few choice words on the food Kitty and Johnny are serving—his sentiments both funny and true. He teases the 40ish Carl relentlessly about his relationship with Tony, a 20-something pool attendant. “What I see when I look into his eyes,” says Miles, “is the back of his head.”

Kenneally is kind and earnest as Kitty’s best friend and in his defense of Tony, and Donna Lennon is appropriately quirky as Kitty’s gossipy, self-centered mother, who has different memories of Kitty’s childhood than Kitty does. “All the energy and self-sacrifice you put into raising your children, and they remember nothing,” she says.

The set is bland, featuring a decorative grid in dark tones that hangs above the action. A plain free-standing bar on the left serves multiple purposes—as the bar in the hotel and in the kitchen of several houses, with the addition or subtraction of a vase of flowers or a birthday cake. A gray sofa on hotel and home seating right is likewise. The action makes use of the areas creatively, but the monotone minimalism is too minimalist for me.

“Happy Now?” has adult themes and language and is not recommended for children or those uncomfortable with such language.

“Happy Now?” continues Friday and Saturday nights at 8 PM and Sundays at 2:30 PM through August 26. Tickets are $20. For reservations and information, call the box office at 508-362-6333 or visit www.barnstablecomedyclub.com.

Village Hall is celebrating its 100th anniversary with an Open House on Saturday, August 18, from 2 to 5 PM. The Barnstable Comedy Club will be celebrating its 90th anniversary, and there will be photos, video, documents, posters, playbills, and costumes on display, and refreshments will be served.