Sunday’s TD Bank 25th Anniversary Pops by the Sea concert, presented by the Arts Foundation of Cape Cod, was a spectacular, star-studded event, with special guests Rachael Ray, Chris Cooper, and Idina Menzel, as well as local talent: the Colum Cille Pipes and  Drums of Sandwich who began the evening performances with a march down to the main tent, and Kandice Wood of South Dennis followed with a beautiful arrangement of “The Star-Spangled Banner.”

The real star of the show was, of course, Keith Lockhart and the 73-piece Boston Pops Esplanade Orchestra, celebrating the 125th of the Boston Pops, and bringing a glorious array of music to the Hyannis Village Green on a gorgeous summer afternoon.

The concert was sold out, and the green was packed with people, their lawn chairs as close as possible to allow more and more people in, an estimated 15,000, a large crowd for downtown Hyannis.

After the national anthem, Rachael took the stage to conduct “The National Emblem March,” joking about how nervous she was, but that former Pops guest conductor William Shatner had assured her that all she had to do was wave the baton around and the orchestra would know what to do.

They did, and Rachael came through it all just fine, adding her own warm humor to the event. 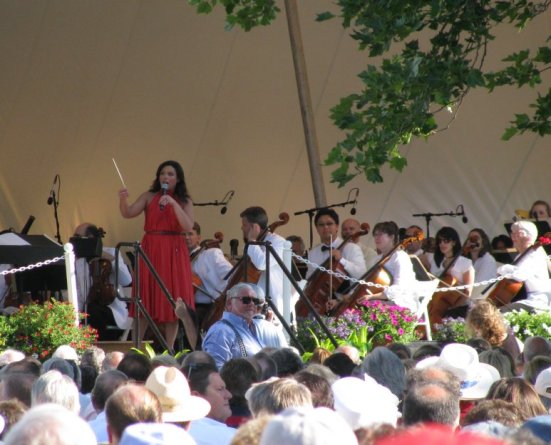 After a rousing performance of Aaron Copland’s “Hoedown” from Rodeo (made famous, Lockhart said, by the “Beef, it’s what’s for dinner” commercial), Lockhart provided a short history of the Pops, which has had 17 conductors from 1885, the year it was formed, until Arthur Fiedler took over in May of 1930. Understanding popular preferences, Lockhart said, Fieldler was “a huge advocate of American musicians and composers” and shaped both the orchestral sound and public taste to create one of the world’s most popular orchestras: “American’s orchestra.”

John Williams took over in 1980, and Lockhart has been conductor since 1995.

Lockhart paid tribute to Fieldler’s influence by conducting Aaron Copland’s “Hoedown” from Rodeo, or, as he put it, the “What’s for dinner?” theme from the beef commercial.

And he honored Williams with the flying theme from “E.T., The Extra-Terrestrial,” one of many movie scores he composed. As if on cue, a cluster of five red balloons broke loose and wafted off into the clear blue sky.

Fieldler, said Lockhart, knew that people liked to sing along, and offered opportunities for them to do so on “Old-Timer’s night.” When Lockhart arrived, he was told by some outspoken older audience members, even one in his 90s, that they did not consider themselves “old-timers,” and the term “sing-along” came to be used instead.

“The Beatles sing-along began with “Sgt. Pepper’s Lonely Hearts Club Band,” not an easy song to sing along to, though the words were printed in the program. But the words fit: “the singer’s going to sing a song, and he wants you all to sing along.” This was followed by “With a Little Help From My Friends (“Lend me you ears, and I’ll sing you a song, and I’ll try not to sing out of key), “Twist and Shout” (the crowd was particularly vocal on the ahhhh, ahhhh, ahhhh, ahhhh part), and “Yellow Submarine,” which had a nice mellow, community feel. 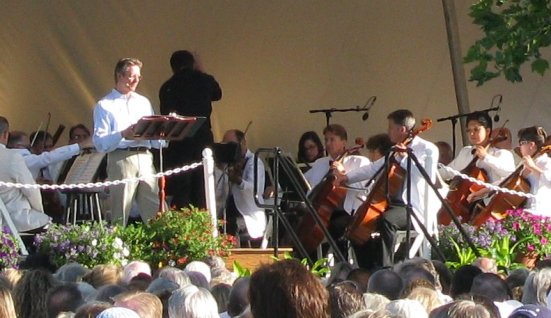 Next was actor Chris Cooper’s narration of “The Dream Lives On: A Portrait of the Kennedy Brothers,” with music by Peter Boyer and words by Lynn Ahrens, which was commissioned by Lockhart last fall. The words, largely quotations from each of the three brothers in turn, speak to the legacy of the Kennedy brothers, their idealism and enduring sense of optimism, “a human vision of what our country can be.”

It was not only the words, by their delivery, by the Jack, Bobbie, and Ted, that made them so eloquent and effective. Chris Cooper gave the words, many of which we know by heart, renewed vigor,  backed by the inspiring orchestral music.

It was particularly meaningful, in such close proximity to the Kennedy Museum on Main Street and Hyannisport. (The Kennedys had been on my mind, having seen, on Saturday night, a preview of the Cotuit Center for the Arts’ “American Camelot” exhibit of photographs, paintings, and sculptures of the Kennedy family. CCftA’s production of “Camelot” opens Thursday, August 5.) 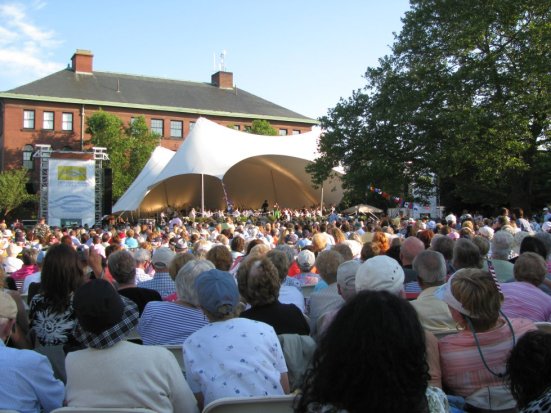 Part of the huge crowd at the Hyannis Village Green

After intermission, vocalist and actress Idina Menzel took the stage. Star of Broadway hits “Wicked” and “Rent,” and a recent addition to the popular television series “Glee,” Menzel was a big hit with the crowd, particularly the younger members.

She seemed surprised that the audience was so attentive, her green dress matching the color of the leaves on the trees of Hyannis Village Green.

“I’m really a wedding singer at heart,” she said. “I’m expecting people to be clinking glasses. You’re all so nice . You’re really listening. I appreciate that. I could cry.”

There was plenty of reason to listen. Menzel has a beautiful voice, and she sang a hauntingly beautiful “Love for Sale,” and some of her big hits: “No Day But Today” from “Rent,” and “For Good” and “Defying Gravity” from “Wicked.” 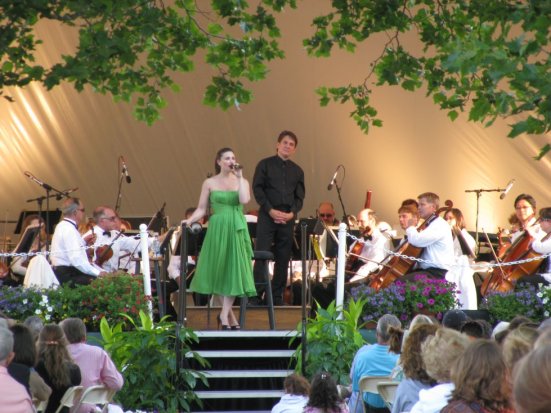 She talked about her 11-month-old baby, Walker Nathaniel Diggs, with husband Taye Diggs (they met on the set of “Rent”) and how their “good morning” baby talk evolved into both a rap and a song, a jazzy, bouncy, bubbly song that she shared with us.

She offered a poignant “Funny Girl,” which she had recently sung on “Glee.” As an encore, she sang a moving “Tomorrow” from “Annie,”  “the song my mother always made me sing at family gatherings.”

By this time, the crowd, growing fearful of being caught in the huge outgoing traffic jam, had begun to disperse. It was sad to see so many people leaving while Idina was still singing. Fortunately for me, though, it opened up a spot where I could stand, shielded by a tree, and catch her last song.

The orchestra ended with “Stars and Stripes Forever.” While, as you can see, people continued to stream out, most of the audience thoroughly enjoyed it.