Just back from the Grey Fox Bluegrass Festival in Oak Hill, New York (just north of the Catskill Mountains). It was hot, it was rainy, it was crowded, and there was a lot of hiking up and down the hill to the stage area, but there was lots of music and fun, and a good time was had by all.

It was a little disorienting setting up camp (4,000 campers camp on-site) on a level surface, after three years (for me) camping on a hillside at the former Grey Fox location. Having a flat surface to sleep on where your air mattress and you won’t slide into a crumpled heap during the night allows you to sleep through even the most determined all-night jam session.

View of part of the camping area from the side of the stage.

Grey Fox is a four-day event for people of all ages. There were infants, there were people in their 80s and there was everyone in between. They share a love of bluegrass, and most of them also play, some taking out their instruments as soon as they set up camp and fiddling all night long. The official performances start Thursday on the main stage. The bands play all kinds of bluegrass music: traditional, country, jazzy, improvisational, progressive, alternative, newgrass, gospel, you-name-it, to an vast audience who have arranged their folding chairs on the hillside. 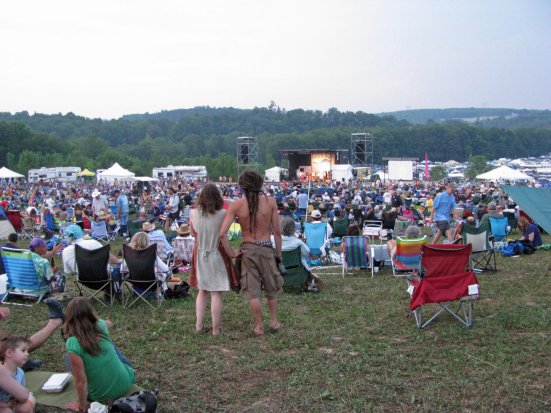 Another view of the audience and stage.

Meanwhile, other performers entertain in the dance tent and the masters tent, my favorite tent, where the crowds are smaller and the performers talk about their music and answer questions, as well as share their music. There is a tent for those who want to learn to play and to play with others, and there is a family tent for the kids, which circus-style entertainment and other activities during the day, and movies at night. There is also a four-day Bluegrass Academy for Kids where this year 100 kids participated in classes in singing and playing various instruments, led by Brian Wicklund and taught by many fine bluegrass players/teachers.

I bring instruments to the Bluegrass Academy from Johnson String Instruments of Cape Cod: violins, violas, cellos, to give the kids an opportunity to try different instruments during an “instrument petting zoo.” It seems a little like taking coals to Newcastle, in they most people who attend bring one or more instruments. Jam sessions are a big part of the festival.

But there are banjo players who want to try the cello, and guitar players who want to try the fiddle, and people curious about the viola, so the instrument petting zoo is usually pretty busy, and I enjoy giving kids (and often their parents) a chance to play a new instrument. This year, we had a very fine young cellist come to try out our cello; he skillfully played Bach as well as bluegrass and improvisational jazz, and it was a joy to listen.

The Bluegrass Academy kids perform on Sunday afternoon, after most people have left. Usually I leave Sunday morning too. (It was a six-hour drive for me this year, though MapQuest claimed I could do it in four hours and 15 minutes, they did not take into account the heavy traffic, and my need to stop occasionally). This year, though, I arrived at Grey Fox late, about 7:30 Friday night, missing almost two days of music, so I decided to stay through Sunday to hear more.

Sunday turned out to be a great day. First, I joined the Town Hall meeting, where campers talked about ways to improve the festival, particularly relating to the new site. People were thoughtful and creative, a great group. Then, I trudged up the hill to the main stage to watch a group called Kindling Stone, who did a little bluegrass, a little religious music, and a couple of Shape Note (Sacred Harp) songs, which were perfect on a Sunday morning in the mountains.

They were followed by Missy Raines, who sings and plays the upright string bass, and her band, the New Hip, who played great improvisational jazzy bluegrass. 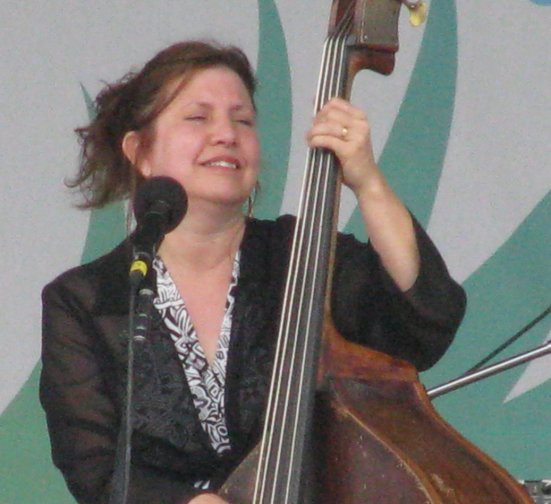 The best was yet to come, though: the kids from the Bluegrass Academy. Their parents were hootin’ and hollerin’ of course, but so were people like me, who appreciated what these kids (elementary school to junior high school age, generally) had learned in only a couple of days and how well they played together. I was delighted to see four cellists in the group, and like others in the audience, happy to see the tradition of this vibrant music continuing on through another generation. 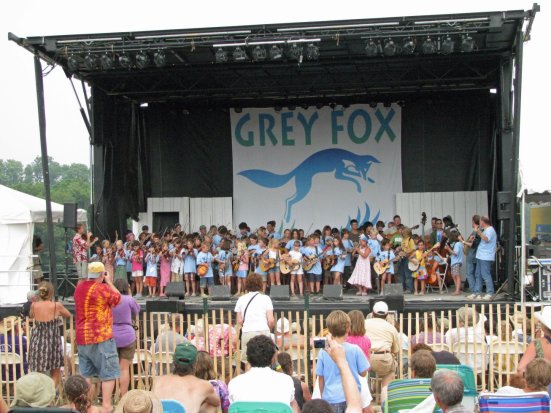 All 100 players and their teachers on stage.