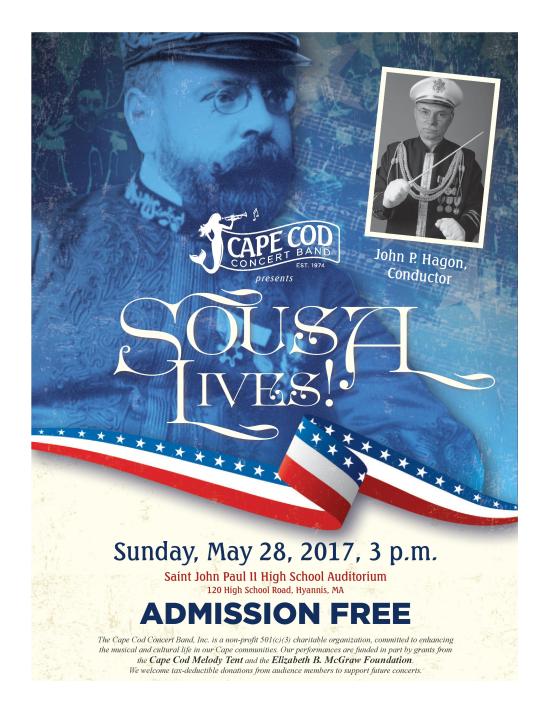 The Cape Cod Concert Band presents “Sousa Lives!” on Sunday, May 28, at 3 PM, at the Pope John Paul High School auditorium, 120 High School Road, in Hyannis. Admission is free, but donations are welcome.

John P. Hagon, director of the Cape Cod Concert Band, who bears a striking resemblance to John Philip Sousa, will don his Sousa uniform (a costume he commissioned to have made, based on period photos) and become John Philip Sousa once again.

“I will be rising from the dead to conduct this concert,’ he jokes. Every few years, Hagon, a retired Army and National Guard band conductor, inhabits the persona of John P. Sousa. Best known as the composer of “Stars and Stripes,” “The Washington Post,” and other march favorites, Sousa was also a famed conductor.

“He was the Arthur Fiedler of his day,” says Hagon, a longtime champion of Sousa’s work. “We know John Philip Sousa for his marches, but the Sousa Band wasn’t a marching band. They were a concert band, performing band transcriptions of classical works and popular music of the day. Sousa’s own marches were played as encores.”

The band traveled by train and by boat, and, according to Hagon, “If there was a train stop in a town, they probably played there.”

Hagon, a resident of Harwich, takes his portrayal of Sousa seriously, from his authentic costume to his conducting style. He even wears the same style of gloves that Maestro Sousa wore.

“They say he threw a pair away after every concert, but I hold onto mine,” notes Hagon, who has conducted more than 60 authentic Sousa concerts around the world. A retired Army and National Guard band conductor, Hagon also conducts the Cape Community Orchestra, and teaches at Berklee College of Music. In 2018, he will celebrate his 60th year as a conductor.

Reprising their role as the Sousa Band will be the 45 members the Cape Cod Concert Band, who volunteer their time and talent to present free-admission concerts for the community. Ray Lang, Sousa aficionado and chair of the Barnstable Planning Board, will once again serve as the announcer for Sunday’s concert.

And there’s one more surprise: Seated in the audience will be a special mystery guest. When she was 4 years old, she attended a Sousa Band concert in Easton, Massachusetts. She remembers shaking Maestro Sousa’s hand. Ninety-two years later, John P. Hagon can’t wait to meet her.