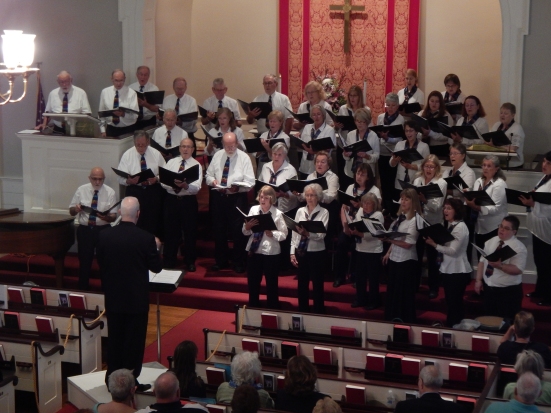 The Greater Falmouth Community Chorus (shown here at its 2016 spring concert) presents its spring concerts, “Swingin’ into Summer,” on Saturday, June 10, at 7:30 PM and Sunday, June 11, at 3 PM, at the First Congregational Church of Falmouth, 68 Main Street.

The Greater Falmouth Community Chorus, under the direction of John Dulina, IV, will hold its 27th annual spring concerts, “Swingin’ Into Summer,” on Saturday, Saturday, June 10, at 7:30 PM and Sunday, June 11, at 3 PM at the First Congregational Church of Falmouth, 68 Main Street.

“We will be singing some great music from the Swing Era, and beyond, a time when words were expressive, when the words were clever, when the words created the vibe,” said Marcy Franklin Lerner, president of the chorus. The program includes favorites such as “Chattanooga Choo Choo” by Mack Gordon and Harry Warre and “All the Things you Are” by Jerome Kern.

Also featured is a song with no words, “The Pink Panther,” by Henry Mancini. “We are the instruments,” said Jackie Nuccio, who serves on the board of the GFCC. “The song is great fun to listen to, and even more fun to sing. It’s toe-tappy music—it makes you want to sway and sing along.”

There will be a Sing-Along, featuring familiar songs from Stephen Foster (1826-1864), who was known as the “Father of American Music.”

The second half of the concert is an extended Gershwin medley, beginning with “Rhapsody in Blue,” and featuring such beloved jazz standards as “Love is Here to Stay.” “Most people don’t realize that Ira Gershwin wrote the words to this song about his brother George, who died in 1937, at the age of 38, shortly after writing the music. The love song expresses his grief at the loss of this brother and musical partner,” said Franklin Lerner.

“The music will bring back memories of summers past, warm nights in the gazebo, days of saddle shoes and poodle skirts, from the 1930s through the ‘40s and ‘50s,” said Sherry Martin, a GFCC board member.“It’s timeless music,” said Dulina, “beautiful music that evokes the emotions, classic sentiments that open your heart, and words that are as meaningful today as when they were written.”