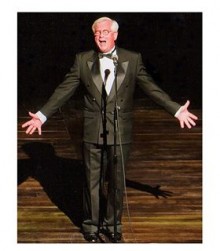 Larry Marsland is one of my favorite local performers. He puts his heart into everything he does, and he really knows how to tell a story—and sing a song.

He is highly regarded for his monologue memoirs, such as “Night Falls in Emerald City,” in which he speculates on what Judy Garland did one night in Boston after failing to show up for a performance, his musical shows; such as “Strictly Sinatra”; and his plays, including “Panama Club,” set in World War II-era Hyannis, which he wrote and acted in.

In “Only Wounded,” Marsland sings the songs of Peter Allen, a composer and performer whose name you might not recognize, but whose life touched Marsland’s in many ways. Marsland does a great job singing, including some of Allen’s big hits songs like “I Honestly Love You,” a number one hit for Olivia Newton John, and “Don’t Cry Out Loud,” a hit for Melissa Manchester, and many others. But the songs are only part of the evening. In between, Marsland tells us stories of Peter Allen’s life, the ways in which Allen’s life and his own intersected, and how AIDs affected a whole generation of gay men.

While audience members may not be used to heading out on a Sunday or Monday night for a show, I suggest that they take Cotuit Center for the Arts up on this new offering. There is so much going on at the center, that it just can’t be compressed into the standard “date nights.”

Marsland opens the show with “Everything Old is New Again,” the song that Allen often opened his act with. He talks about the first time he saw Peter Allen perform at Reno Sweeney’s in Manhattan, on a stage “just big enough for a piano, a singer, and a microphone.”

Marsland loved Reno Sweeney’s (where he also performed one time) and was impressed with Peter Allen, keeping an eye on his career. Originally from Tenterfield, a small town in New South Wales, Australia, Allen was discovered by Mark Herron, “the momentary fourth husband of Judy Garland,” when he was performing in Hong Kong. (Allen later briefly married Judy Garland’s daughter, Liza Minelli).

Allen and Marsland came to New York at about the same time, in 1968, and enjoyed the wild party days of the 1970s and the more somber AIDS-dominated 1980s there. Allen died in 1992 of AIDS-related cancer, while Marsland returned to the Cape.

Allen was a prolific songwriter and an active performer, and Marsland gives his songs an excellent presentation, not imitating Allen’s style, but performing them with honesty and raw power.

Marsland gave a particularly moving performance of Allen’s tribute to Judy Garland, “Quiet, Please, There’s a Lady on the Stage,” which he followed with an equally emotional “Over the Rainbow.”

Not all of Allen’s songs were first-rate, Marsland acknowledges. Many are ambivalent about love and many of them fade away rather than being given a proper finish. But Marsland has chosen an excellent selection for this performance, including the title song, “Only Wounded” (“I was only wounded by your love”) and the theme song from “Arthur” (“The Best that You Can Do”), which was actually written by Allen and three others: Christopher Cross, Burt Bacharach, and Carole Bayer Sager. The song won an Academy Award in 1981 for Best Original Song.

“The Best that You Can Do” has never been one of my favorite songs, but Marsland’s version and his story about the origin of the line “caught between the moon and New York City” gave it new freshness and vitality that appealed to me.

There is a lot to like about Larry Marsland’s “Only Wounded,” and much of interest learn about Peter Allen. You may not know his name, but you will know many of his songs, and it is very likely you will enjoy Marsland’s performance.