“Art21: Art in the Twenty-First Century” is a PBS series that aims to make contemporary art more accessible to the public through in-depth profiles of individual artists. Each artist speaks for him or herself—no art critics step in to translate or evaluate their art—describing his or her creative process, sources of inspiration, use of materials, and general approach to art. Each hour-long episode features four contemporary artists.

The show debuted in 2001 with four themed episodes, and, since then a season of four episodes has been produced every two years or so.

On Friday, June 20, the Cape Cod Museum of Art will present the Art21 episode, “Systems,” from the 2009 season, followed by a panel discussion with the artists in the current “Six of One” exhibition at the museum: Joe Diggs, Sarah Dineen, Richard Neal, Jackie Reeves, André van der Wende and James Wolf. The event begins at 7:30 PM in the museum’s Screening Room and will be narrated by Christy King, the museum’s education coordinator.

Contemporary art is a vast and diverse topic which can’t, of course, be confined to a single hour-long video, but “Systems” is a fascinating introduction to those who may be intrigued or baffled by it and an inspiration for those who make art of any kind.

John Baldessari sums up his approach to making art: “I’m always interested in things we don’t call art and I ask why not? What can I do to this to make it art? I love it—because I say it’s art, somebody believes me.” 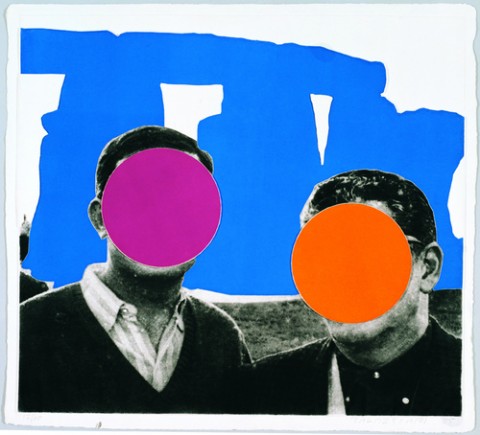 Baldessari originally rejected art. He grew up with a “real sense of moral obligation” from going to church. “Art didn’t do any good—it didn’t heal bones; it didn’t help people find shelter.”

In his late 70s when the show was filmed, Baldessari apparently changed his mind early on and has since spent a lifetime communicating through art, often in a witty or ironic way.

We might not want to believe that when Baldessari purchases “photo op” photographs of public officials and puts blank, round price stickers over their faces that he is creating art. Yet, his explanation of the meaning of these photographs for him is interesting. For him, the stickers obscure the identity of the individual, usually a person in a position of local power, “leveling the playing field and making people replaceable.” 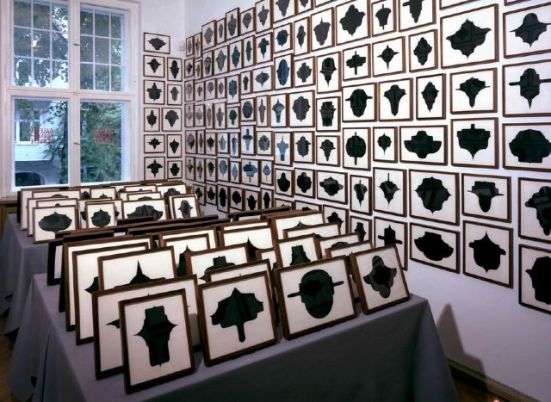 Allan McCollum takes a completely different approach. The nephew of John Nagy, who taught people to draw in a traditional fashion with a step-by-step approach, McCollum sets out to create individual symbols for all the people of the world, a way of acknowledging the differences among people.

He mass produced some of his designs by hiring four home businesses in Maine to handcraft thousands of his designs as rubber stamps, ornaments, silhouettes, and cookie cutters.

“The idea of making an object for everyone in the world is, of course, absurd,” he states, but he pushes forward.

Julie Mehretu also sees the absurdity of some of her work, notably her 21 by 85 foot painting commissioned by a Wall Street firm to convey the story of the capitalist economic system. The painting is so large that she is completing it in sections in a studio in Berlin as her own studio in New York was not large enough. She has a team of artists assisting her, translating her smaller, many-layered paintings to the larger scale. It will take a year and a half to complete and then will be taken apart and shipped to New York.

At the same time, she is working on a series of seven 10 by 14 foot paintings.

Mehretu says she is not trying to tell a story; she wants people to feel the painting. It is clear she feels her own paintings, particularly as she tells a story about experimenting with watercolors over drawings. She added too much color at one point and sanded it away. She then realized that “the erasure itself became the action.”

It reminded her of the caves of the Buddhas in Afghanistan. The Taliban removed the Buddhas, creating an image of their absence. From this sad moment, Mehretu saw her own erasure paintings as “a hopeful gesture.”

Kimsooja’s video begins with her performance art. She lies on a rock to connect with nature; she stands still in a mass of people walking along a crowded city street, calling herself Needlewoman, as the throngs weave around her.

Fortunately, she moves on to her installation art, much of which is extraordinary. She uses bottari, small bundles held together with brightly colored traditional fabrics in different arrangements and relates them to their traditional Korean function. She hangs traditional fabrics in a room where observers walk through them as if they were hung laundry.

In another installation piece, she hangs hundreds of pink lotus-shaped lanterns on the ceiling of a large public space, while Tibetan, Gregorian, and Islamic chants merge together, creating a ceremonial piece. For her Crystal Palace installation, she covers the glass walls with a film that creates rainbow images and the floors with a mirror-like reflective material. The effect is magical.

Clearly, all the works presented in “Systems” will not appeal to everyone, but this short video reveals new approaches to art and opens one up to new ways of thinking about contemporary art and artists.