“Talking With…,” by Jane Martin, is a well-written, engaging, and fast-paced series of monologues by or about quirky, compelling people. I can’t imagine a better production of it than the one director Holly Erin McCarthy of Theatre Under the Stairs has put together for Cotuit Center for the Arts. It runs through December 16.

McCarthy’s cast of eight versatile women (including herself, in a late substitution) and one remarkable man is very well chosen. In individual monologues, each actor portrays an unusual character or circumstance with humor, empathy, and quirkiness. The monologues are not, at least on the surface, related, though one can find deeper themes if one looks: light and darkness, for instance, or the slender line separating “normal” behavior from madness.

McCarthy opens the show with “Fifteen Minutes,” a monologue in the form of pre-show chatter by a nervous actress to an unseen person in the dressing room. McCarthy is effervescent in the role, as the actress complains about directors she has worked with and wishes to know more about the audience sitting in the darkness. In the end, she self-confidently takes her place in the light. 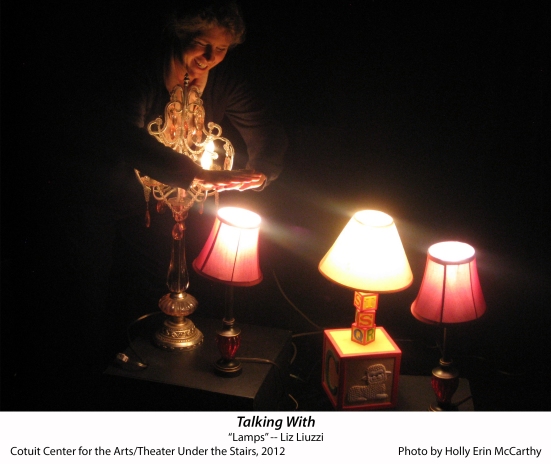 Liz Liuzzi is up next in “Lamps.” She plays a charming elderly woman (“mad as a March hare”) obsessed with lamps and the patterns of light and darkness she creates with them, “each lamp, a pool of warmth.” This is a haunting piece, funny and imaginative.

“Clear Glass Marbles” is the most poignant of the monologues; in it Jeanny Wishingstone is a grieving daughter who shows us not only deceased mother’s eccentricity, but also how she savors that eccentricity and allows it to comfort her in her loss.

Cathy Ode performs “Audition” with a remarkably well-behaved live cat. This actress is certifiable, as she offers classic and contemporary options to those she is auditioning for, one involving a dreadful fate for the cat. Ode is outrageous and mesmerizing. The cat is calm under pressure.

High school student Shannon Lindlau is a young Appalachian snake handler who serves tea to her tattered dolls in “Handler” as she enthralls with stories of encounters with poisonous snakes. “Snakes know how you feel. You can fool a person but you can’t fool a snake.”

In “Dragon,” Jennifer Marshall prays to St. Margaret to survive her agonizing labor and for her child (whom she envisions as a dragon) to live.

The only male actor in this show is Jared Hagan as “The Twirler. “Talking With…” is intended as an all-female show, but McCarthy knew Hagan would be just right for this part, and he is. His performance is both endearing and hilarious; dressed in sparkles, he recounts his baton-twirling triumphs and the spiritual aspects of twirling. “People think you’re a twit if you twirl,” he recounts, in deadpan. “But the secret for a twirler is the light.”

Carol McManus is a battered, but gloriously optimistic, homeless woman who yearns to live at McDonald’s in “French Fries,” not only for the peace it offers at night, when no one else is there, but for its plastic utensils. They are, in her vision, God’s proof of eternity: “If there is plastic, then there has to be eternity.”

In “Marks,” Janet Preston gives a moving performance as a woman who “did as she supposed she might be told” until she was 35. She was unmarked by life, until an attacker cut her on the cheek with a knife, leaving a scar. People begin to look at her differently;  the scar gives her confidence, and a new approach to life.

“Talking With…” was the 1982 winner of the American Theatre Critics Association Award for Best Regional Play. ”Jane Martin” is a pseudonym for an anonymous Kentucky playwright assumed to be Jon Jory, playwright and former artistic director of the Actors Theatre of Louisville, considered one of the top regional theaters in the country. Jory has denied being Martin, but has directed premieres of Martin’s shows. Whoever the author may be, this show is both entertaining and thought-provoking, and this production is well-worth seeing.