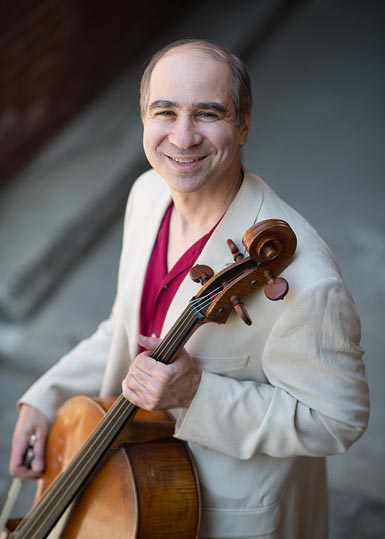 The Falmouth Chamber Players Orchestra, under the direction of John Yankee, will present its fall concerts on Saturday, November 10, at 4 PM, and Sunday, November 11, at 3 PM at John Wesley United Methodist Church, 270 Gifford Street, Falmouth.

Acclaimed cellist Emmanuel Feldman is the featured soloist in a performance of Antonin Leopold Dvořák’s Concerto for Cello and Orchestra, in B Minor, Op. 104. The orchestra will also perform works by Weber and Mozart.

Hailed by John Williams as “an outstanding cellist and truly dedicated artist,” Emmanuel Feldman has emerged as one of the most innovative and expressive cellists of his generation. On his recent release, “Our American Roots,” Gramophone called Feldman, “an artist who combines communicative urgency with tonal splendor.” Known for intense and soulful playing that explores a broad range of repertoire and styles, he enjoys a multifaceted career as soloist, chamber musician, recording artist, and educator.

Considered by many to be the greatest cello concerto ever written, the Cello Concerto in B Minor is notable for its memorable themes, somber opening, lyrical horn solos, dramatic energy, and hauntingly beautiful slow second movement. Dvořák had reservations about writing a cello concerto because he felt the cello was not powerful enough as a solo instrument. He was inspired upon hearing Victor Herbert’s Cello Concerto No. 2 in E Minor in 1894, when both were at the National Conservatory in New York. Herbert had been the principal cellist in the New York Philharmonic, the orchestra that premiered Dvořák’s “From the New World” Symphony. Dvořák dedicated the concerto for his friend Hanuš Wihan, considered the finest Czech cellist of the day.

The second movement, Adagio, contains an emotional quotation from one of Dvořák’s songs, “Leave Me Alone,” which was a favorite of his sister-in-law, Josefina Kaunitozová, who was now dying. Thirty years earlier, she had been one of his piano students and he had been in love with her. She did not return his affections, however, and he eventually married her younger sister, Anna. The song returns in the spirited, dance-like Finale.

Dvořák wrote, “The Finale closes gradually diminuendo, like a sigh, with reminiscences of the first and second movements—the solo dies down. . . then swells again, and the last bars are taken up by the orchestra and the whole concludes in a stormy mood. That is my idea and I cannot depart from it.”

Also on the program is Carl Maria Von Weber’s Overture to “Oberon,” which he composed in 1826, finishing it just three days before its premiere performance. Weber died less than two months later at the age of 39.

“Oberon, or The Elf King’s Oath,” is a three-act romantic opera. The Overture has been praised as delightful and fresh work, that “vibrates with an almost intoxicating sweetness.” It begins with a delicate French horn solo, evoking a fairyland mood, before concluding with a fiery Allegro.

Wolfgang Amadeus Mozart wrote his festive Symphony 34 in C Major, K338, in 1780. It opens with a vibrant fanfare and features unexpected and unpredictable twists in the introduction and repetition of themes. The slower and gentler second movement is scored for strings alone, plus bassoons, while the lively final movement has been compared to a fast-paced, surprise-filled comic opera.

Laura Sonnichsen, principal second violin and vice-president of the orchestra, is excited about the concert. “We have an outstanding selection of music and are so pleased to be able to bring Emmanuel Feldman to the Cape,” she said. She and her husband Fritz Sonnichsen, the orchestra’s president, met Feldman earlier this year when he coached their ensemble at a chamber music workshop. “We found him to be warm and friendly, patient, extremely knowledgeable, and willing to share his experience and ideas freely. He’s a scintillating player and connected right away with John Yankee and with the orchestra. It is a privilege to have him perform with us.”

Born in New York City to Juilliard-trained parents, Feldman is part of a large musical family. He studied violin, piano, and French horn before taking up the cello at age 12. He made his solo orchestral debut only two years later, performing Dvořák’s Cello Concerto. He went on to study cello at the Curtis Institute of Music with a number of notable teachers.

Feldman has performed throughout Europe and North America, has collaborated with numerous distinguished instrumentalists, and has appeared frequently on radio and television. He has commissioned interdisciplinary dance and poetry collaborations, and he and his wife, double-bassist Pascale Delache-Feldman, co-founders of Cello e Basso (formerly Axiom Duo), have commissioned more than a dozen new works for their duo.

A composer and arranger himself, Feldman’s works include “Synergy” for string orchestra and “Enigma #1” for cello and double bass. He has released nearly a dozen albums, receiving recognition for his commitment to solo and chamber works by contemporary and American composers.

Admission is by donation at the door; the suggested donation is $20 for adults and $5 for students.