On the program is Beethoven’s Symphony No. 2 in D Major (Op. 36), Bach’s Concerto in D Minor for Violin and Oboe, and Strauss’s “Tales from the Vienna Woods.”

Hector Berlioz said of Beethoven’s Second Symphony, “Everything in this symphony smiles.”

Ludwig van Beethoven wrote his Second Symphony in 1802 during his stay at Heiligenstadt. He was 32 and coming to realize that he was going deaf. It was not a happy time for him; yet the symphony abounds with vigor and joy.

Beethoven replaced the traditional minuet with a scherzo which, along with the finale, was filled with musical jokes that shocked contemporary critics. The first movement begins slowly and elaborately, with a complex rhythmic energy that is said to reflect the composer’s views, expressed in his “Heiligenstadt Testament,” of a dignified, mature, and serious vision of life. The second movement contains folk and pastoral elements, expressing noble ideas growing out of great sorrow.

“Beethoven’s Second Symphony is one of the last works in his ‘early period,’” said Laura Sonnichsen, vice-president of the orchestra. “It tends to be overshadowed by some of his more famous symphonies, but it has a bold energy and a dynamic vitality that is very appealing.” 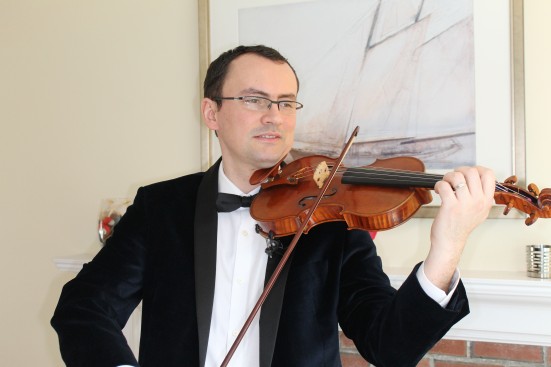 “It is always a pleasure to perform works composed by Bach, especially one of the Double Concertos,” said Flonta. “The work is written with unparalleled musicality and precision. The dialogue between the violin, oboe and orchestra is astounding, and it underscores the beautiful effect created by blending the two instruments.”

“I really love the Bach double concerto,” said Hayn. “The central adagio movement, in particular, gripped me right from the start with its light, interwoven melodies traded off between the two instruments. The oboe and the violin play off the strengths of both instruments, creating a kind of musical magic.

“And that’s the challenge as a player; to blend harmoniously while, at the same time, bringing out the unique qualities of your instrument. We move from beautiful harmonies to passages where the violinist nimbly dances around the slower, more melodic oboe line before the parts intersect to dance together again.”

Hayn is principal oboist for the FCPO and is also a member of the Brockton Symphony Orchestra. She plays in several chamber groups in the area, including Windology, a newly formed South Coast wind quintet.

Flonta is the founder of the Cape Cod String Quartet and an active member of the performing arts community on Cape Cod. He has performed extensively throughout Europe and North America. Some of the venues include the Berliner Philharmoniker Concert Hall and Chamber Music Hall, the Herodes Atticus Theater in Athens, Greece, the Norwalk Concert Hall, Troy Music Hall and the EMPAC Center in Troy, New York.

Johann Strauss, Jr., wrote “Tales from the Vienna Woods” in 1868. Among his most recognizable and well-loved waltzes, it is one of six he wrote that featured a virtuoso part for zither. Since a zither is not available for this concert, Yankee will be offering an alternative. He plays the hammered dulcimer, a distant relative of the zither family, and will play a simplified version of the part in this performance. Also notable is a reflective cello solo and a short, birdlike flute cadenza.

Known as the Waltz King, Strauss composed over 500 waltzes, polkas, quadrilles, and other types of dance music, as well as several operettas and a ballet.

Admission is by donation at the door. A $20 donation for adults, and $5 for students, is suggested. For more information, contact Fritz Sonnichsen, president of the FCPO, at 508-274-2632 or fcpo@FalmouthChamberPlayers.org, or visit falmouthchamberplayers.org.