Come Hear the Music Play!  A Review of “Cabaret”

In his book on musical theater, which contains a fascinating chapter on “Cabaret,” Scott Miller quotes Walter Kerr’s 1966 New York Times review:  “Cabaret,” Kerr wrote, “opens the door to a fresh notion of the bizarre, crackling, harsh and the beguiling uses that can be made of song and dance.”

It is a wonderful description, and the Cotuit Center for the Arts’ production, directed by Kiley Donovan, vividly captures this essence of the musical. It is glamorous and dangerous, sweet and doomed—and  wildly entertaining. The music holds it all together and spins it apart, the production firmly evoking the overt message of the classic Broadway show, warning against complacency in the face of evil disguised as nationalism.

The entire theater space at CCftA has been transformed into the Kit Kat Klub, complete with table-and-chairs seating and a bar offering both alcoholic and “virgin” drinks and snacks. Actors use the entire space, often moving into the audience, as they would in a nightclub, and dancing or marching through the aisles as they enter and exit.

The live band, its members in black with a touch of red, is dramatically positioned on the second level of the theater space, outlined in theatrical lights. A circular stairway on either side of the stage provides access from one level to the other.

Scene changes are made in a most creative and effective way—so much fun to see for the first time that I will not say more. Costumes and makeup are glamorous and decadent, often at the same time, and, it should be noted, they are often minimal, including some partial nudity. Lighting is used well, both for the nightclub and boarding house scenes. Strobe lights magnify the effect of a strident march.

But it is the solid efforts of the cast that make this show special. Donovan has assembled a fine group of experienced actors and relative newcomers, and they work together seamlessly, giving the show a very professional look and feel.

Kai Stewart plays the Emcee with a darkly appealing sexuality, humor, and a sparkle of evil, hospitably welcoming us into the world of the cabaret, more aware than others of the consequences, but telling listeners to forget their troubles because, “Here life is beautiful.”

He introduces us to the “beautiful girls” of the Kit Kat Club, heavily made up, drearily dressed—or undressed—in shades of black and white, some men in drag. He proclaims their purity, though their appearance and demeanor indicates something quite different.

Stewart is terrific as the Emcee, giving his character a convincingly multifaceted presence, and the dancers, despite their rag-tag look, are accomplished performers, moving easily on the floor, on the stairs, and arrayed on chairs.

Particularly entertaining is “Two Ladies,” a blatantly suggestive, but humorous, song and dance number with Laura Shea as Lulu and Martha Paquin as Fritzy. Even more memorable are the increasingly ominous “Tomorrow Belongs to Me,” and the initially playful “If You Could See Her,” both making good use of the chorus/dancers. 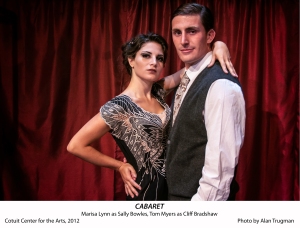 Singularly outstanding is the “perfectly marvelous” Marisa Lynn as Sally Bowles, the carefree nightclub entertainer who, like many in Germany and elsewhere at the time is oblivious of societal changes and what they mean for Germany’s future. Spurning Clifford’s offer of a safe and boring life in America, she chooses her freedom and a way of life that will soon end.

Sensuously expressive, with luminous eyes, a gorgeous face and limber body, Lynn enters with a rollicking “Don’t Tell Mama,” singing much better than Sally might have.  Flirtatious and sweetly manipulating, she gave “Perfectly Marvelous” just the right touch.  She does a terrific job with the title song, “Cabaret,” conveying powerful emotions through it.

She told me after the show that she was not at all sure about her voice, but knowing that Sally was intended to be a second-rate nightclub singer would not have actually hit every note gave her confidence. It is hard to believe that, prior to this production, she hadn’t acted in 10 years, and never sang in a musical or had a lead role in a theatrical production. She auditioned only after Donovan asked her to, having seen her at a Big Collage production some months earlier. Kudos to both Donovan and Lynn.

Cliff Bradshaw, the ruggedly handsome American novelist looking for a story in Berlin, is well played by Tom Myers. It is through Cliff’s eyes that the story is told, and he is one of the few who understands, somewhat belatedly, what is happening. Myers supports Lynn well in “Perfectly Marvelous,” and does a fine job on the tender “Don’t Go.”

When Sally apologizes for distracting him from his novel with the endless round of parties, Cliff summarizes the plot well: “But I like those parties. The truth is, I like this whole city. It’s so tacky and terrible – and everyone’s having such a great time. If this were a movie, you know what would happen? A volcano would erupt – or there’d be a tidal wave…”

Janet Constable Preston is Fraulein Schneider, Cliff’s landlord. A strong presence, Preston conveys Fraulein Schneider’s sense of powerless well, from her inability to get Cliff to pay full price for his room (“So What”), to her fear of the consequences of her relationship with her Jewish suitor, the fruit grocer Herr Schultz (“What Would You Do?). In between there are some lovely romantic moments between Fraulein Schneider and the buoyantly optimistic Herr Schultz (“It Couldn’t Please Me More, or Pineapple Song”). Kempton Parker is perfect as Herr Schultz, caring and kind, and unwilling to believe that he could be in danger. After all, he is a German citizen.

Michael Ernst plays Ernst Ludwig, the friendly German whom Cliff meets on the train and who helps him settle in to Berlin. Ernst is quite at ease on stage, and his transformation to the face of the Nazi party is sly and chilling.

Elin Hersch is Fraulein Kost, who shines, malevolently, in the reprise of “Tomorrow Belongs to Me,” her eyes particularly expressive.

Keyboardist Glenn Starner-Tate directs the band, which features trombonist Guiseppe Falzarano, trumpeter Daniel LePage, bass player Brian Sandlin, and percussionist Michael Dunford. The band, along with a couple of stage band members, looked the part and sounded great, setting just the right mood every time—and the mood varied considerably. The band had exceptional control over dynamics, both for dramatic purposes, and to provide an appropriate balance with the singers.

The story of the Nazi rise to power, and the failure of so many people to recognize the danger, had particular relevance in 1966, when the show debuted on Broadway. Many people were just beginning to learn about the extent of the Holocaust. It was a time of protest against currently perceived repression, against racial discrimination and the war in Vietnam, and for avowing women’s liberation and civil rights. And, like Weimar Germany, it was a time of new-found sexual freedom and experimentation, making the themes in “Cabaret” especially relevant.

Many of the same forces are still at work today (homophobia, restrictions of women’s rights, genocide) and the musical remains a powerful reminder of what can happen when people pretend all is well and that that brick through the window is nothing but a random act of innocent children at play.

Choreography is by Pam Wills, costumes by Cindy Parker, set design by Jim Hoeck, lighting design by Greg Hamm, and stage management by Kelan McDonnell. It is clear from the final production that they work together well.

It should be noted that “Cabaret” has adult themes, brief nudity, and simulated sexual acts and may disturb some people. It is recommended for mature audiences (PG-13).

Performances are Thursday, Friday, and Saturday evenings at 8, and Sunday afternoons at 4. Tickets are $25, $22 for seniors, $20 for members, and $15 for students. Group rates are available for parties of 10 or more with one payment.

Come early or stay late to see “The Big Picture,” a photography exhibit, and “Life is a Cabaret,” a collection of life-size fabric collage body portraits created by local artists and art students. You can also see the exhibits during the 15-minute intermission, but you might just want to take the time to grab a drink at the Kit Kat Klub.