Maestro Stephen Simon will conduct the Simon Sinfonietta tomorrow night (March 31, 2012, at 7:30 at Falmouth Academy in Falmouth, MA), offering a wonderful array of music from different time periods, including a piece commissioned by the Washington Friends of Handel to celebrate the 200th birthday of George Frideric Handel. Simon conducted the premiere of the work, “Concerto Grosso 1985,” by Ellen Taaffe Zwilich, at the Kennedy Center in Washington DC with the Handel Festival Orchestra (subsequently the Washington Chamber Symphony).

Pulitzer Prize-winning composer Zwilich is also a violinist and she based her concerto grosso on Handel’s Violin Sonata in D Major, a piece she has enjoyed performing. Concertmaster Charles Sherba will perform the first movement of the sonata to give the audience a better understanding of the inspiration for the Concerto Grosso. 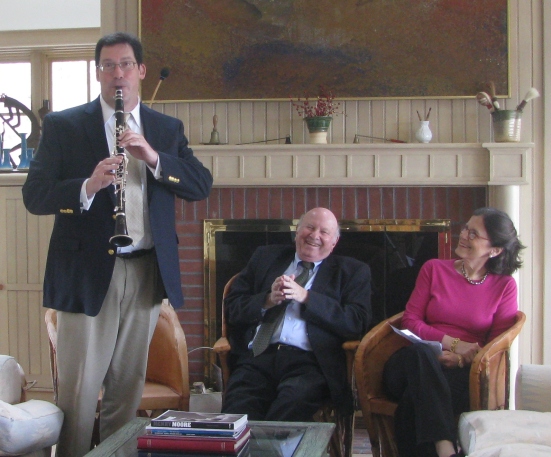 Also featured is Carl Maria von Weber’s Concertino for Clarinet and Orchestra in E-Flat Major, which will be performed by Mark Miller, principal clarinetist for the Simon Sinfonietta and for the Cape Cod Symphony Orchestra. The concertino was written in 1811, back when the clarinet was still considered a new-fangled instrument. The work shows the full range of the clarinet and helped to give the instrument more prominence. Von Weber went on to write two clarinet concertos.

The concertino is a must-see for students of the clarinet. As Miller says, the piece is often the first serious work of classical music performed by clarinet students, giving them a chance to display their virtuosity as they explore the instrument’s many moods and techniques.

He is also a composer and arranger for orchestra, wind quintet, and clarinet choir.

Bonnie and Stephen Simon and Mark Miller got together on Monday to discuss the concert offerings earlier this week, and I taped the conversation for Falmouth Community Television, FCTV. Mark gives a delightful introduction to the concertino. Here is that discussion: