I didn’t attend Woodstock. I recall giving it some thought at the time, but figured it was too far to drive from where I was living in Washington DC. I did, however, attend the Bath Festival of Blues and Progressive Music the following year (1970), a little farther from home, but I happened to be in England at the time, temporarily escaping from the materialistic culture of the U.S. Or, at least, I sort of attended it.

A friend and I arrived on Thursday night by train from London, and, like many others, we slept in the train station that night. At the festival site the next day, I remember big expanses of fields, and long lines for porta-potties and food. I recall waiting in line for what seemed like hours for what I still regard as one of the best meals I have ever eaten, a chunk of crusty French bread, some cheese, and an apple.

The next night, unencumbered by sleeping bags and tents, or even jackets (I was wearing my favorite long-fringed vest), we simply lay down on the field where we had been standing and went to sleep. Technical difficulties prevented the music from starting until Sunday evening, and we had to leave just as Johnny Winter was starting things off. I remember running for the train station, looking back to see as much of the performance as we could without missing the train. (Back in London, we spent the night in Chelsea, and when we woke up, it was a Chelsea morning, but that is another story.)

Wikipedia said the music started Saturday evening and continued through 6:30 AM on Monday morning and that 150,000 people attended, far smaller than Woodstock’s half a million strong, but still a sizable crowd.

Despite the lack of music at the Bath music festival, at least when I was there, I still remember it fondly. People were friendly, mellow, and patient, and it was a beautiful weekend.

I haven’t been to another rock festival since then, but for the last five years or so have been attending bluegrass festivals, notably the Grey Fox Bluegrass Festival held annually in July on a farm in upstate New York, not far from where Woodstock was held. It is in the Catskill Mountains or may just north of the Catskills, and south of the Adirondacks.

Grey Fox attracts a different crowd than Woodstock did, though there is quite an array of tie-dyed clothing, the smell of pot hangs in the air, and some of the attendees might have been at Woodstock 40 years ago. I met one woman who had been coming to Grey Fox for 33 years, ever since the festival began (it was formerly known as the Winterhawk Bluegrass Festival.)

I’m not a die-hard bluegrass fan, but I do enjoy the  genre, especially the “alternative, progressive” sound and its connections with fiddle, folk, jazz, and even classical music. It is my brother who is the real bluegrass fan in our family, and it was he who introduced me to the music. And he played “Foggy Mountain Breakdown” on his banjo at my wedding (my sister played Bach, on piano).

About 15,000 people attend the festival, and they come in huge recreational vehicles, campers, truck, and cars. They set up tents for sleeping and for picking (guitars, banjos, and mandolins, not corn); shelters from the sun, wind, and rain; elaborate cooking devices; and personal shower tents. They bring their kids, their parents, their friends, and their instruments. Most people who attend also play a bluegrass instrument or sing, and many like to do that all night long. The number of “quiet camping” spots, where campers must stop playing by 10 PM, are far fewer than the “picker’s paradise” camp spots, where musicians can gather round the clock and jam, beginners to pros, and all levels in between. 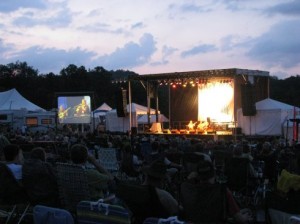 For those not picking, or taking a break from picking, there is lots to do. There is one bluegrass band after another on the main stage, and, in the masters tent, one can enjoy an up-close-and-personal informal concert/question-and-answer session with other bands. Bluegrass music is surprisingly diverse, including traditional old-time bluegrass, country-twangy bluegrass, gospel grass, new grass, folk grass,  rock-and-roll twinged bluegrass, progressive bluegrass, pop bluegrass, jazzy bluegrass, and even Swiss grass from one of my favorite groups, the Kruger Brothers, originally from Switzerland, but now resettled in North Carolina.

The Kruger Brothers on the Main Stage.

I also enjoy the young bluegrass bands, including  two from Boston, Crooked Still and the Boston Boys. Crooked Still is a little folksy, but with plenty of vigor, describing themselves as a “hot young alternative bluegrass group,” and includes a cellist in their band, while the Boston Boys, all graduates of the Berklee College of Music are high-energy rockers, describing themselves as contemporary roots rock. 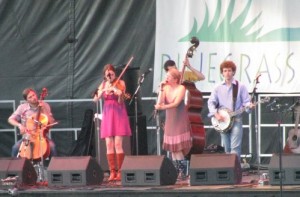 Crooked Still on the Main Stage.

Crooked Still (left) and the Boston Boys (right) in the Masters Tent.

There is a dance tent, where you can learn folk and traditional dances as well as freely express yourself to the tunes of the festival bands. There is yoga, dance instruction, a children’s activity tent, instruction for beginning musicians, and places for them to find each other and jam together.

There is a Bluegrass Academy for Kids, where children and teens can learn to play fiddle, banjo, guitar, mandolin, dobro, string bass, and even cello. My role in this festival has been to bring violins, violas, and cellos for kids to try out at the Bluegrass Academy.  It  feels a bit like bringing coals to Newcastle: the place is awash with instruments of all kinds.

There is plenty of food, including organic fruits, vegetables, and meat from local farms that you can cook up on your grill. You can buy cheese, bread, and apples too, and enjoy your own festival feast, or buy food already prepared by vendors.

You can buy crafts, jewelry, clothing, hand-made soap, and camping supplies too. There are lots of tie-dye shirts and batik dresses that are so appealing at the festival, and maybe not so practical at home, when you realize that it is a little too funky, after all.

We, my daughter and I, arrived at Grey Fox on Wednesday evening, July 15, around midnight. The festival ran from 2 PM Thursday, July 16, to Sunday afternoon, the 19th. You have to get there early to secure a camping spot. Tents are pitched pretty close to one another, and it can be hard to find a spot to wedge in your tent. Especially if you arrive at midnight. 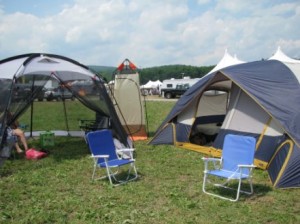 Our camping site. The large white tent in the background is the Dance Tent.

This year, we were told we could camp in the staff quiet camping area, which is, apparently not in high demand because the staff would rather jam than sleep. It worked out great for us, though. We had plenty of space for our large tent (sleeps 10! — packed like sardines), our screened in gazebo, and our shower tent, and still had room left over for friends arriving the next day.

We finished setting up by 2 AM, and, after enjoying a few snacks we had purchased at a grocery store along the way, quickly fell asleep on our comfortable air mattresses, outfitted with sheets a blankets. A far cry from the Bath music festival.

Over the next four days, we spent hours and hours listening to bluegrass music of all kinds, sampling foods of all kinds, and, occasionally, finding time to take out our instruments and attempt a tune. We (my friend’s granddaughter and I) were playing Ashokan Farewell, when a man came over to complement us on our playing. Not a musician himself, he had recognized the tune from his daughter having played it. That was fun, feeling part of the music scene there on the mountain. I bought a couple of CDs and a necklace to match the ring I had purchased at last year’s festival, and my daughter bought matching peace sign finger and toe rings.

There were some torrential rains, and the ground became very muddy and slippery. I saw a group of three mud people who had taken advantage of the situation to cover themselves in mud, Woodstock style (though they kept their clothes on), and I slipped and fell a couple of times, but the sun did come out again, thankfully, in time to dry our tents before it was time to take them down and pack them away.

It wasn’t Woodstock, but it was nice to be immersed in music for so long–and silence when there was silence, and an invigorating escape from everyday cares and responsibilities.