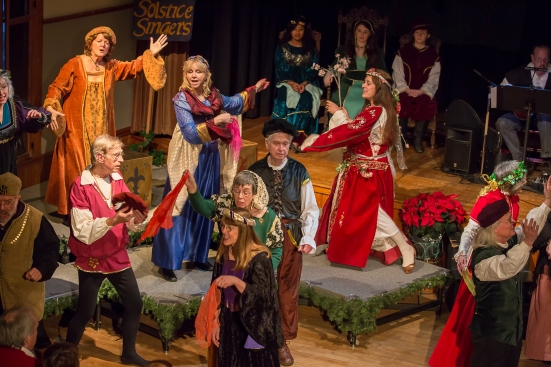 The Solstice Singers and guest artists will perform “A Very Merry Midwinter,” a pageantry of songs, instrumental  music, drama, and dance in the style of the Renaissance, at 4 PM on both Saturday, December 19, and Sunday, December 20, at the Woods Hole Community Hall.

The Solstice Singers perform in colorful period costumes, which adds to the festivity. Some pieces are sung a cappella, such as the soothing “Celtic Lullaby” Irish air performed by the women of Solstice Singers. Many of the songs are accompanied by Ensemble Passacaglia, including 16th century “Gaudete” where costumed singers stride boldly across the stage, singing and waving colorful scarves in celebration.  Selections include old favorites such as “The Boar’s Head Carol” and “Lord of the Dance.”

In addition to accompanying the 14 singers, Ensemble Passacaglia will perform several of its own traditional Renaissance carols and Medieval Spanish cantigas. The instrumentalists are Jan Elliott of Woods Hole on recorder, Lisa Esperson of Falmouth on percussion, Tom Hanna of Sandwich on lute, and Molly Johnston of Boston on viola da gamba. Passacaglia will also introduce the audience to unique sounds of lesser known instruments such as the crumhorn, cornamuse, and bouzouki.

A feature of this year’s program is the children’s chorus, Les Enfants du Soleil, which has grown to 14 singers ranging in age from 6 to 14. In addition to joining the adult chorus on several seasonal favorites, the children will perform a few of their own delightful songs, such as “The Friendly Beasts” and “Jolly Old Hawk.”

Always a highlight of the winter shows, the Vineyard Swordfish dance team will perform a sword dance called “Woods’le.” While fully embracing the English longsword tradition, Woods’le is one of several original dances created to showcase the dance team’s signature style. Led by Jan Elliott, Vineyard Swordfish is accompanied by Ron Geering of Woods Hole on hurdy gurdy and Jacek Sulanowski of Falmouth on drum.

The singers also take their turn at dance. Five couples perform “Branle des Chevaux” – a sprightly yet elegant traditional piece choreographed around the theme of horses. The tune “Three Country Dances”  is sung by the men of Solstice Singers while pairs of women exemplify each of the dances.

Both shows on December 19 and 20 are at 4 pm at the Community Hall located at 68 Water Street in Woods Hole. The hall is accessible to people with disabilities. Free parking is available (visit the web site for details). Admission is $20 for adults ($17 when purchased in advance) and $10 for students. Children under 12 are admitted free of charge. Advance tickets are available at Eight Cousins Books on Main Street in Falmouth and Market Street Bookshop located in Mashpee Commons. For more information, visit www.solsticesingers.org.

Formed in 1992 under the guidance of the late Patricia Brown, the Solstice Singers, ranging from 10 to 15 singers, has performed under the direction of Lore Loftfield De Bower of Woods Hole since 2000. The group’s primary mission is to provide community enrichment by performing music in the style of the Renaissance. The singers, many of whom have been with the group since its inception, come from Cape Cod and southeastern Massachusetts.

Tickets for adults are $20 at the door, or $17 in advance from Eight Cousins Books in Falmouth and Market Street Bookshop in Mashpee. Student tickets are $10, and there is no charge for children under 12. The Community Hall is at 68 Water Street in Woods Hole.