There is still time to see Buzzard Play Productions’ exuberant “Pajama Game,” directed by Corinne Cameron, with music direction by Nancy Sparklin. The rollicking musical closes this weekend after a three-week run. Final performances are Friday June 27, and Saturday, June 28, at 8 PM, and Sunday, June 29, at 2 PM.

“The Pajama Game” is altogether entertaining, with some great songs, ambitious choreography, and talented actors who do a fine job with this tale of union-management issues at the Sleep-Tite Pajama Factory. The show is based on the novel, “7 ½ Cents,” by Richard Bissell. Music and lyrics are by Richard Adler and Jerry Ross.

The show opened in 1954 and won Tony Awards for Best Musical, Best Choreography (by Bob Fosse), and Best Featured Actress in a Musical (Carol Haney, who played Gladys).

The Buzzards Bay production has much to offer. Rob Minshall is a standout as Sid Sorokin, the tall, good-looking new pajama factory superintendent, newly arrived in Junction City, Iowa. He catches the eye of the diminutive Babe Williams (Ann Vohs), the assertive, no-nonsense head of the grievance committee. 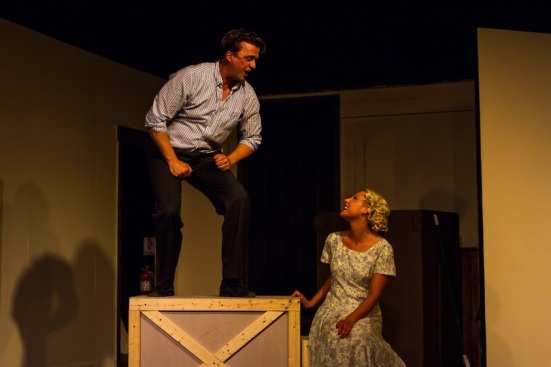 Sid (Rob Minshall) and Babe (Ann Vohs) declare their love for each other.

She denies her attraction in “I’m Not at All in Love,” nicely accompanied by the female sewing machine operators, and Sid wonders about love with a heartfelt performance of “Hey, There (You with the Stars in Your Eyes).” It was good to hear both these classic songs performed so well.

Kevin Kenneally is Hines, the office efficiency expert who tries to keep everything running smoothly at the factory. He’s in love with Gladys, the boss’s secretary, played by the effervescent Caitlin Backholm. Kenneally has an impressive voice and some good dance moves; he is comic and convincing in his humorous numbers: “I’ll Never Be Jealous Again” and in “Think of the Time I Save.” 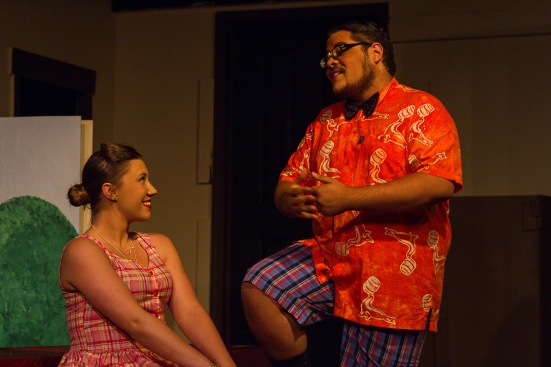 Caitlin Backholm as Gladys and Scott Medeiros II as Prez

Backholm’s many talents—acting, singing, and dancing—are put to good use, and she is fun to watch, especially in her scenes with Prez (Scott Medeiros II), the union leader, who tries to seduce her at the company picnic, and with Sid, who takes her to Hernando’s Hideaway in hopes of extracting some information from her. She also leads the vivacious Steam Heat Dancers (Cassie Jordan, Caleigh McIntyre, and Samantha McMahon). 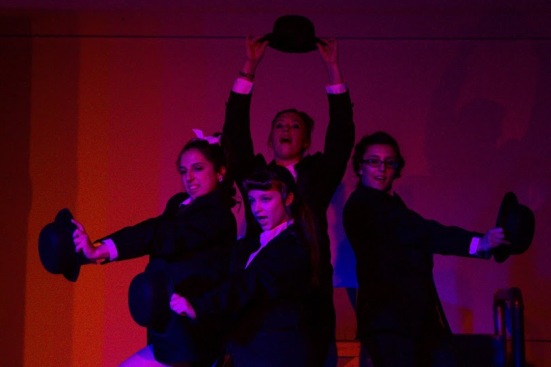 Medeiros is goofy and amusing in his role as the woman-chasing Prez. His duet with Backholm, “Her Is,” is lively and fun.

Rachael Kenneally plays Brenda, one of the seamstresses, with such pizazz that I wanted to see her in the role of Babe, for which she is an understudy.

Eventually Sid and Babe profess their love for each other in an exquisite “There Once Was a Man.” It’s powerfully done, complete with glorious whoops.

Ann Vohs as Babe, in a dramatic dance scene.

Problems arise, of course. Employees want a 7 and a half cent an hour raise, and management refuses. On opposite sides of the issue, Sid and Babe find their love tested. Along the way, there are plenty of spirited song and dance numbers. Dancers take to the stage with enthusiasm, leaping to the tops of desks, tables, and shipping cartons, and summersaulting and cartwheeling across the stage. The choreography is challenging, and sometimes the movement seems a little tentative, but most is jubilant and inspiring. Credit goes to director/choreographer Cameron, her co-choreographer Caitlin Backholm, and dance captain Rachael Kenneally.

Costumes evoke the 1950s well, and the sets, by Chele Maurer, are well done, and very mobile, which is quite helpful when there is no curtain to mask set changes.

Musical accompaniment is excellent, thanks to music director Nancy Sparklin on piano, Kosta Gouzias on bass, and Ryan Sander on percussion.

The theater is a little rustic, a little funky, with an intimate feel and informal seating—anything from folding chairs to a plush sofa. You can buy hot dogs and popcorn and soda to enjoy during the show, and there is a great view from any point in the audience because of the built-in risers. It’s a warm and friendly place to enjoy community theater.

For more information on Buzzards Play Productions and “The Pajama Game,” visit buzzardsplayproductions.com or call 508-591-3065 to reserve tickets.