James Broughton was a poet, an experimental film maker, and a gay/countercultural icon who urged people “follow your own weird, do your odd thing” to fully experience the joy of life. His story is told in “The Big Joy: The Adventures of James Broughton” which was shown this week at the Woods Hole Film Festival to a very appreciative audience.

Directed by Stephen Silha and Eric Slade, “Big Joy” is a beautiful, energetic, and moving film, incorporating archival footage and stills of Broughton from childhood through his later years (he died in 1999 at the age of 85) and more recent interviews with his contemporaries, partners, ex-wife, and son. It draws from Broughton’s own journal entries over the years (he kept journals from the age of 13 until he died) and is rich with clips from his 23 short films and excerpts from his 23 volumes of poetry. It is a fascinating look, not only at Broughton, but at the era in which he lived, and the philosophy he espoused.

Broughton was not as well-known as some of his contemporaries, such as Allen Ginsberg, Lawrence Ferlinghetti, Alan Watts, and Jack Kerouac, but he was highly regarded for his personal warmth and positive, playful outlook, despite a difficult early life. He had a terrible relationship with his overbearing mother, who deducted 25 cents from his allowance each time he displayed any effeminate behavior, and he suffered periods of depression, even contemplating suicide at one time.

Broughton enjoyed relations with both sexes, defining himself pansexual. He lived for a time with film critic Pauline Kael, fathering a daughter with her, and later married Suzanna Hart, with whom he had two children. But the love of his life was Joel Singer, a 25-year-old film student at the time they met. Broughton was 61. The two lived together, collaborating on projects, until Broughton’s death 24 years later. Both Suzanna and Singer (and many others) are interviewed in the film, providing much insight into Broughton’s life and times.

Broughton became a poet at a very early age. When he was only 3, he dreamed that an angel came to him and urged him to write poetry. The angel, whom he called Hermy, remained his muse for the rest of his life, inspiring both poetry and film.

In “Visitation from Hermy,” Broughton describes what the angel said to him:

“If I followed the game sharply enough,/I could be a useful spokesman for Big Joy.”

Broughton was a member of the San Francisco Renaissance of the 1940s (participating in the first poetry reading in 1947) and of the Beat movement of the 1950s that grew out of it. Though never really famous, he remained an active poet and filmmaker and taught film for many years.

His poetry “gets to the serious by focusing on the silly,” an interviewee in the film says. Some of his poetry is reminiscent of nursery rhymes or Haiku, and much of it is boldly sexual, and humorous. The film provides a small taste of his work, often amusingly and creatively presented.

Broughton made his first film “to see what my dreams really looked like, to make them real.” 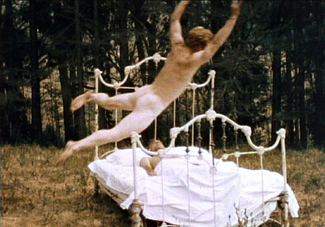 Considered the “father of West Coast experimental film,” Broughton is perhaps best known for his 20-minute 1968 film, “The Bed,” which ran for three years in San Francisco. A tribute to the “summer of love,” the film celebrated and encouraged the sexual revolution with its poetic visions of nudity, freedom, the beauty of the human body, sexual imagery, and the joy of life. It won many prizes at film festivals.

His 1953 film, “The Pleasure Garden,” 38 minutes long, won him a special jury prize for poetic film at the Cannes Film Festival and he was offered the opportunity to direct a mainstream commercial film. He turned it down, which Pauline Kael called the biggest mistake of his life.

It probably wasn’t a mistake at all, judging from the film excerpts shown in “Big Joy.” It is hard to imagine that someone so happily doing his “own odd thing” would find satisfaction in commercial film. That is one of the charms of the film, that Broughton followed his passion—passionately—throughout his life; he didn’t sell out or settle down, and he seemed to have found his own big joy.

Kitten Calfee, producer of marketing and distribution for “Big Joy,” who grew up in Woods Hole and now lives in San Francisco, was in Woods Hole to promote the film.

“Broughton did not get the recognition he deserved in his lifetime,” Calfee told me. “For him, film was not about how to hold the camera, but how to organize your mind to get visual images on the screen. He was ahead of his time, pushing the envelope, not worrying about what other people thought, encouraging people to pursue their passions.”

“He did a lot of his best work in the 1970s and 1980s, during a burst of creativity and freedom, a golden age, before AIDS. AIDS changed everything,” Calfee said, “for a lot of creative people.”

Many of Broughton’s books of poetry are out of print, but this year, the 100th anniversary of his birth, there are plans are to reprint them, notably his book on filmmaking, “Making Light of It.” Some of his films, or excerpts of them, can be found on YouTube, and there is a wealth of information on the film site, BigJoy.

According to Calfee, the film will probably be shown next in Boston and Providence. For more information on future local events, including poetry events, visit the Big Joy Cape Cod Facebook page, as well as the film Facebook page, Big Joy Documentary.