I  was not ready for today’s Healing Our City prayer service at the Cathedral of the Holy Cross in Boston. I was not ready to be resilient. I a little more time wailing, keening, and weeping over the tragic deaths of two young women and a boy and the many devastating injuries caused by the bombings at the Boston Marathon. I want to know that all the injured have medical care and insurance coverage that will see them through what may be a long treatment period, especially for those who lost a limb. And many will need counseling, even many with no physical injuries themselves. I want the perpetrators–apparently two carelessly malevolent young men–arrested.

But, like many, I watched the service. I was touched by Mayor Thomas Menino, rising from his wheelchair, his broken leg giving him an unspoken connection with the victims. “Nothing will take us down because we are here for one another,” he said, as he talked about the kindness shown by the many who came to the aid of the injured and the runners on Monday.

Gov. Deval L. Patrick was uplifting, saying, “We will recover and repair. We will grieve our losses and heal. We will rise and we will endure. We will have accountability without vengeance. Vigilance and not fear. And we will remember, I hope, long after the buzz of Boylston Street is back . . . that the grace this tragedy exposed is the best of who we are.”

President Obama spoke movingly of those who died, giving them life again in our hearts: Martin Richard, Krystle Campbell and Lu Lingzi. He was inspirational and determined, reminding us: “Even when our heart aches, we summon the strength that maybe we didn’t even know we had. We finish the race. 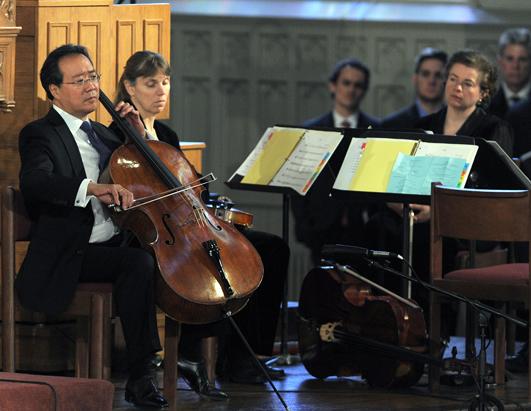 Yo-Yo Ma expressed what words could not. He performed the hauntingly beautiful Sarabande Bach’s Cello Suite No. 5 in C Minor, a piece Ma also played following the September 11 terrorist attacks.

Yo-Yo Ma talked about the meaning of the piece for “All Things Considered.” He said he thinks of the Sarabande as “a struggle for hope.”

“The falling motion of most of the notes is contradicted by periodic rising notes. In the last bar of the piece,” he is quoted as saying, “all but one of the notes rise and I think that represents the strength of the human spirit and, today, the spirit of Boston.”

I am feeling stronger, even resilient. I am thankful for today’s message of hope from the many religious leaders and government leaders who spoke, and from the singers and instrumentalists who gave us time to mourn and a message of hope.

One thought on “Resilience and Hope”