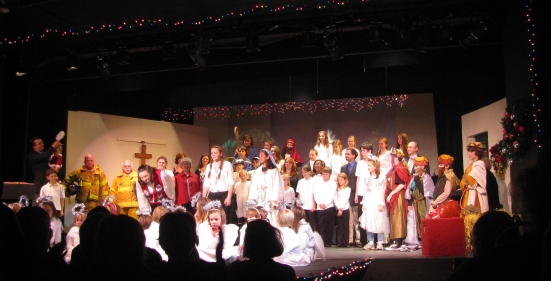 The cast of “The Best Christmas Pageant Ever.” Corrine Minshall, as Grace Bradley, takes a bow, while Kit Palmer (Beth Bradley) and Kristina Thimme (Imogene Herdman) stand in center.

The Falmouth Theatre Guild’s production of “The Best Christmas Pageant Ever” is charming, heartwarming, and full of holiday spirit. Directed by Lisa Jo Rudy, with music direction by Jeanne Kuzirian, “Pageant” is the story of how the six wildly unruly Herdman kids help a whole community experience the Christmas story anew.

Based on the 1972 book of the same name by Barbara Robinson, “The Best Christmas Pageant Ever” has a timeless quality, as all good Christmas stories do. (Copies of the book are given to random ticket holders at the start of each show). This is the fourth year in a row that the Guild has produced the show, and each show has been different, reflecting each director’s own vision, yet conveying both the predictability and ineloquence of an uninspired church pageant and the magic that happens when everything comes together in the end, changing people’s lives in the process.

Rudy has set show in the present day, primarily by having the children cell phones, which distract them during rehearsals, and she has added more musical numbers, including the use of young instrumentalist and an opening mini-concert.

This is truly a family show for Rudy: her husband Peter D. Cook is stage manager and set designer, her son Tom Cook plays the clarinet, and her daughter Sara Cook is one of the annoying Herdman troupe: Loretta, the one who regularly takes Charlie’s lunchtime Twinkies. (To really bring this play into 2012, one would have to reference an anti-bullying program and perhaps refine the Twinkies line.)

Real-life couple Corinne and Robert Minshall play Grace and Bob Bradley, and their one-year-old son, Remy, puts in an appearance at the end. Grace has been asked to take over the production when long-time pageant chair Mrs. Armstrong (Davien Gould) breaks her leg three weeks before the big event. Grace lives up to her name, welcoming the Herdman children into the production when they show up at the church looking for free snacks. Bob is harder to convince, but his compassionate interpretation of the Christmas story helps save the day.

Corinne is especially good in her role as the frazzled pageant director, and Robert is comical, as Bob keeps trying to get out of even going to the pageant.

Kit Palmer shines as Beth, the Bradley’s daughter who narrates this story. She is self-assured and believable as a teen who is initially angry at the Herdmans for ruining the pageant and making trouble for her mother, but ultimately defends them to her friends–not an easy thing to do.

Kristina Thimme is also outstanding as Imogene Herdman, the loud-mouthed, wise-cracking oldest Herdman, who is transformed into s a tender, loving Mary.

Andrew Bielinski is just right as Charlie, the younger of the two Bradley kids, who calls the pageant “boring,” and enjoys mocking Mrs. Armstrong’s guidance: “There are no small parts, only small actors.”

Lily Raposa is both hard-hearted and buoyant as Gladys Herdman, the youngest and the meanest of the Herdmans, who takes on her role as the Angel of the Lord with manic enthusiasm.

Sara Cook is spunky as Loretta Herdman, whose hunger for sweets and determination to take whatever she wants, whenever she wants it, sets off a chain of events.

Other Herdman kids are Aspen Hansen as Ralph, Joel Hansen as Claude, and Ethan Pratt as Ollie, all of whom do a fine job.

Jeanne Kuzirian leads the chorus of young singers on stage, rather than from the pit, which lends an authentic feel. Three young instrumentalists add to the musical mix. Ava Warner plays cello, effectively introducing and recapping selections by the chorus (she also sings in the introductory choir). Tom Cook plays clarinet and a young woman, uncredited in the program, plays saxophone, to begin the show.

The aptly named Mrs. Armstrong is played by veteran FTG actor Davien Gould, who tries to direct the show from her hospital bed. Gould has taken on this role in the past and continues to give Mrs. Armstrong a wonderful comical haughtiness.

In real life, Gould values shows like “Pageant” for introducing a multitude of young cast members to the theater, giving them “small,” but essential roles. There are over 60 people in the cast, many of them small children, including the always adorable “baby angels,” and numerous adults. Like the church pageant, “The Best Christmas Pageant Ever” brings the local community together on stage and behind the scenes.

Abby Bart, Stacii Robbins, and Meg Hansen designed the costumes, which brighten the pageant scenes, and a team of actors and helpers constructed the set, and a host of others helped with technical and logistical aspects.

But Wait, there’s more! Highfield Theatre is at the top of the hill, at the end of Highfield Drive in Falmouth, located between Highfield Hall and the Falmouth campus of Cape Cod Conservatory. The Conservatory has opened its doors to theater-goers after each Saturday and Sunday performance of the show. Young (and older) musicians play holiday music, an array of refreshments are provided, donated by area businesses, and arts and activities are displayed, including a preschool model (with stuffed animals) arranged by vocal teacher Leslie Loosli. Visitors will be invited to sing Christmas carols, as members of the piano faculty perform. Admission is free.

Plan to arrive early to take in a tour of Highfield Hall before the performance. The mansion is elaborately and festively adorned for the holidays. Local musical groups are performing, and there will be storytelling, crafts, art, and more. Holidays at Highfield takes place Friday from noon to 7, Saturday from 10 AM to 4 PM, and Sunday from noon to 4 PM through December 9.  Admission is $5.

And a preview video: I created a video preview of “The Best Christmas Pageant Ever” for Falmouth Community Television (FCTV). You can see it here: