Guest conductor Kurt Bestor hosted “A Night at the Movies: The Music That Makes the Movies Magical” on February 11 and 12 with the Cape Cod Symphony Orchestra. The Pops performance was fun and educational; Bestor told fascinating stories about movie music from the early days of silent film through recent Oscar winners, leading the orchestra in memorable moments from numerous films.

Utah-based Kurt Bestor is a musician (most known for his trumpet playing) and an award-winning composer who has written over 40 film scores and more than 40 themes for television programs and commercials. Since 2003, he has been performing his “A Night at the Movies” show at various locales with different orchestras to pay tribute to the scores and composers that help make movies  memorable.

He began by conducting the orchestra in “Night at the Movies Overture,” a medley of 30 or 40 melodies (his account and the number listed in the program differed, and I could not keep track) from movie scores. I recognized many of them, but couldn’t place them, and started turning to my husband Glenn after each phrase. He knew a lot more than I did, though even I could name the “Jaws” theme when it came around. The orchestra introduced it with a dramatic and humorous pause, and as the cellos, basses, and low horns began the familiar ominous rhythm, the audience laughed in appreciation.

There were many others: “The Bridge Over the River Kwai,” “My Heart Will Go On,” “Goldfinger,” ending in a rousing “Star Wars.”

No doubt many others were enjoying the challenge of quickly identifying the themes from such a great collection of movies, and Bestor acknowledged this. “I love that you are discussing the music,” he said with a smile when he finished the overture.

Bestor reminded us that movies did not always have sound, saying that music was added to silent films to mask the incessant clickety-clackety hum of the movie projector. At first it was simply background music, with no effort made to relate to the movie’s mood or action. Sometimes, he said, pianists would use the time to practice their weekly lessons.

Gradually, though, the music began to relate to the story, musical sound effects were included to punctuate the action in the film, and orchestras supplemented the piano. Moving to the piano, Bestor gave us a very entertaining demonstration of how a pianist might accompany one of Charlie Chaplin’s films, showing how music can really enhance the story.

He then led us through the decades, talking about the developments in musical score composition, using iconic films as examples, and leading the orchestra in a performance of each movie’s theme music.  His stories, many learned first-hand from his contacts in the movie music industry were well-told and offered many insights into the genre.

Video from many of the films was displayed overhead to emphasize the relation of the music to the action. The movie scores covered were “Gone with the Wind,” by Max Steiner; “The Red Pony,” by Aaron Copland; “Vertigo,” by Bernard Hermann; “The Pink Panther,” by Henry Mancini; “Star Wars,” by John Williams; “Hoosiers,” by Jerry Goldsmith; and “Super Hero Medley,” arranged by Kurt Beston.

I particularly enjoyed score from the “The Red Pony.”  As the orchestra played Copland’s “Dream March” theme from the 1949 film, we watched the scene in which a small boy walks through the woods with his dog, drumming on basket. As the mists surround him, he is transformed in his imagination into a soldier with a real drum, joined by an army of others, the musical score emphasizing every move. Bestor met Aaron Copland and noted that he was “a delightful man,” but he wanted things done his way. This was probably a very good idea.

To introduce Alfred Hitchcock’s 1958 film, “Vertigo,” Bestor talked of the origins of the screeching violins  theme from the shower scene in

“Psycho.” Hitchcock originally did not music want for that scene, thinking silence would be more effective, but the composer, Bernard Hermann, convinced him otherwise.  Another good call by a composer.

Bestor introduced Tim Miller, film critic and entertainment editor for the Cape Cod Times and an adjunct professor of film studies, to talk about “Vertigo,” Miller’s favorite Hitchcock film. Though Hermann composed scores for many Hitchcock films, Bestor noted that the two had a difficult relationship.

The music from “Vertigo” was indeed dizzying, and the special lighting effects (red spotlights and a random pattern of lines projected on the walls behind the orchestra) added to the dramatic effect.

Lighting effects were used throughout—different colors and effects for different films, which gave the evening a cinematic feel.

After intermission, Bestor presented a kind of hokey “Do-It-Yourself Film Scoring” exercise, in which he showed a scene from “The Great American West” and asked Tim Miller to critique three different film scores for it. The film clip was a little dark, but involved a large grizzly bear chasing a cowboy into a lake.

The orchestra played a version of Beethoven’s Fifth Symphony the first time the clip was shown.  It worked surprisingly well, as a woman in the audience pointed out. But Miller was obligated to reject it.

Next, the orchestra offered a melody in the style of Looney Tunes composer Carl Stallings. Miller commented that the music was beautifully played but not suitable, as it made him want to look for Bugs Bunny.

The third score was written by Bestor himself, and was, indeed, the score used in the movie. 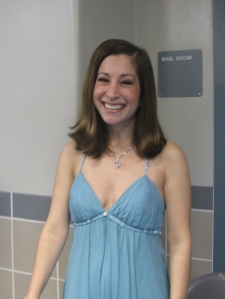 Jennifer Beth Glick, who is an award-winning singer/actor/dancer—and estate planning attorney who teaches at Harvard—shared her considerable vocal talents by singing two Oscar-Award-winning songs, “Moon River,” from “Breakfast at Tiffany’s” and “My Heart Will Go On” from “Titanic.”

“Moon River,” which I haven’t heard in a long time, was beautifully presented, with Bestor adding his own touch on harmonica. “My Heart Will Go On,” which I have probably heard too many times, was lovely too, featuring some nice flute solos, as well as Glick’s expressive voice.

Before Bestor’s final orchestral number, his own arrangement of much-loved movie songs by John Williams, Bestor took the time to praise the orchestra, “an incredibly strong orchestra” for the small population area it serves. And, he said “most of them are pretty nice people.”

Bestor and the orchestra received a standing ovation from the audience, who thoroughly enjoyed this multimedia romp through movie score history.