About a dozen years ago, I found myself with a few hours of free time in Washington DC, following a business meeting, before I had to catch a plane for home. I decided to go to the Smithsonian Institute, where I stumbled upon a wonderful exhibit of biological illustrations. Included in the exhibit was a small room with numerous microscopes set up where you look at biological specimens. Next to the microscopes were paper and pencils, so you could try your own hand at drawing those specimens.

I selected a small bug and set to work drawing it. It was a totally engrossing and enjoyable task. The hours passed quickly and I barely made my flight home. Subsequently, I took an afternoon nature drawing workshop in Duxbury (where I was living at the time), but I have not really found time since then, to set aside a few hours for nature drawing and to recapture that magic of the first session at the Smithsonian.

Recently, though, I attended a class in Nature Drawing in Woods Hole, taught by professional biological illustrator Julie Child. There, the magic is all around. People who have never had any formal art instruction, people who have been told they couldn’t draw, people who believed they couldn’t draw, are drawing, accurately and expressively, and they are doing it with confidence and ease. Students genuinely enjoy the time spent drawing; there is no tension or fear of creating a bad drawing (as one sometimes sees in art classes).

Left to right, students of Julie Child’s class include: Dorothy Aspinwall, Fran Weiffenbach, Sally Casper (in back, by window), Frank Child, and, in front, Julie Child.

My story about the art class appears in Friday’s Enterprise. Here I want to include a few photographs that didn’t fit in the newspaper. 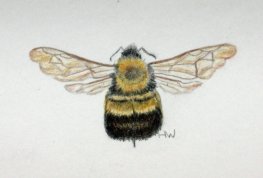 This bumblebee was drawn close to actual size by Helen Wilson, using colored pencils. The small size made the drawing more challenging. Helen has taken Julie’s class for several years and showed me her portfolio. It was inspiring to see her drawings of varied natural specimens, as well as teacup with an intricate pattern in blue. To portray the blue pattern accurately, she had to use many different shades of blue and very carefully outline the patterns.

Ann Newbury was working on a pen and ink drawing of a hawk, and I am sorry that this photo does not do it justice. She was using various colors of ink, and shading in each feather with lines, going over each feather five to seven time to produce the effect she wanted. She was not finished with it when I took this photo; there are more feathers to detail, and she will add a background, some rocks for the hawk to perch on.

Frank Child, Julie’s husband, has recently joined the class, and he produced this colorful beetle. He worked hard on the blending of the colors to get the realistic look of the beetle, including the reflection of light on its back. 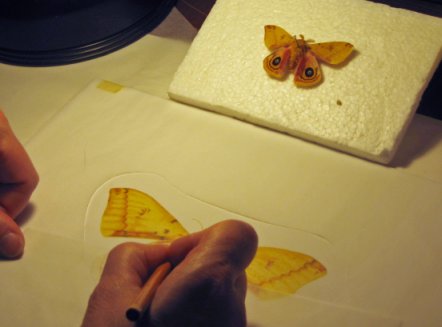 Nancy Stafford was drawn to the io moth, a relative of the luna moth, once plentiful on the Cape, and now rare. She was using many different shades of yellow and brown to capture the essence of this colorful moth.

Sally Casper used a magnifying glass to see the detail in the multi-hued scallop shell she was drawing. She admitted she didn’t keep her pencils in order by color, as did some of the other artists, but she always knew which color to use the the way to apply the colors. “You would think,” she said, “that you should put down lighter colors first, then go over them with darker colors, but ofter the better method is just the opposite, to put down the darker colors first and go over them with the lighter colors.”

Fran Weiffenbach was working on a watermelon wedge, made more difficult by the fact that she had to replace her watermelon “model” every week, as it lost its freshness. If you look closely, you will see her drawing has black seeds, though her current watermelon piece has white seeds. Nevertheless, she has captured its watermelon essence.

These detailed iridescent shells are the work of Dorothy Aspinwall. Like most of the other students, she used colored pencils to achieve a painterly effect. After finishing these shells, she began a complicated drawing of another iridescent shell, a chambered nautilus.

Joan Kanwisher has been drawing for years, and her skill is evident. She has been working on a series of drawings of bird’s nest. This one contains three eggs and is set in a flowery tree.

Here is a close-up, showing the intricate detail of her work: 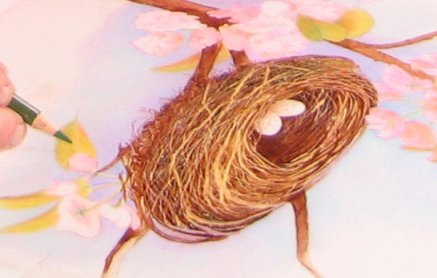 The nature drawings of 22 students of Julie Child will be on display from June 7 to October 11 at the Woods Hole Historical Museum in Woods Hole. The public is invited to an opening reception on Saturday, June 7, from 4 to 6 PM and to a gallery talk on Saturday, July 12, from 4 to 6 PM. In addition to viewing (and being inspired by) the artwork, visitors may buy notecards featuring images from the exhibit.

One thought on “Nature Drawing”